Showing posts from April, 2006
Show all

Give us your tired, your ingrown, your pimpled masses

"more than $83 million in payments for thousands of illegal immigrants' medical expenses.

Half of that money came from the federal government, which only allows its share of Medicaid to be spent on undocumented immigrants in emergencies.

April 27, 2006
New research that could, in the right circumstances, be used as the basis for an innovative legal defense: Male Rivalry Increases When Females At Most Fertile.
Post a Comment
Read more

The slow motion tragedy of the Cassville Cave Boy continues. The media, with its typical short attention span (and likely confused by the rescue of the imposter Cave Boy) has already moved on to more important stories:Hardee's is piling on the beef in its latest offering, the Philly Cheesesteak Thickburger. It's basically a giant burger combined with a Philly Cheesesteak sandwich.

The meat-on-meat monster has a-third of a pound of ground Angus beef, Swiss and American cheeses, green peppers and onions, and thinly sliced steak meat. It's not for the diet-conscious. Hardee's says the Philly Cheesesteak Thickburger packs more than 900 calories and 63 grams of fat.Meanwhile in a pinching cave, Cave Boy endures the the freezing hours away. Though to be fair, that is one humongo sammich.

In the unlikely event Cave Boy isn't dead two weeks and two days from now, can someone remind me to use some o…
Post a Comment
Read more 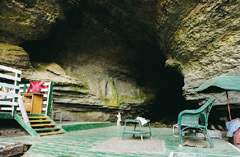 Is the Cave Boy crisis over? According to a story published in the Springfield News-Leader, which describes the rescue of a boy from the cave (Rockhouse Cave) near Cassville, it is:“Rescue crews spent more than five hours Tuesday extricating an injured Springfield Public Schools student from a cave near Cassville.
The 13-year-old fell or slipped and hurt his back while climbing a slope in the cave during a school field trip.”But note the age of the boy: thirteen. As careful readers surely recall, the age of the Springfield Cave Boy was fourteen, meaning the rescued boy is an entirely different cave victim, or possibly a hoaxer - a Cave Boy copy-cat if you will. Meanwhile the real Cave Boy lies a moldering, trapped somewhere within the bowels of Rockhouse Cave, forgotten by all. Except me. Although the cave itself looks pretty happening:

Why our ancestors ever left stylish caves for shoddy, miserable huts I’ll never know. Swami was on to something.

April 19, 2006
Approximately five miles east of Cassville, Missouri, on the edge of the Mark Twain National Forest, a Springfield boy is trapped in a cave. I’m setting up an account in order to raise a minimum of $10,000 in donations on behalf of the Springfield Cave Boy. Two weeks and 5 days from now I will wager these donations on the 132nd Running of the Kentucky Derby. I will re-invest 50% of any winnings at other horse tracks, the rest I will squander. This I promise you, Cave Boy.

In other tragic cave news, this time from the Island of Tobago:“the body of “Swami,” a well-known figure in the Plymouth area, was found in a cave on a beach in the vicinity of the Arnos Vale Hotel on Sunday.”No one had seen Swami for a month, last Sunday a villager dropping by Swami's grotto nosed his corpse. Swami had lived in the cave for the past 30 years, and by all accounts had a good time doing it. Think of Swami at the end of the month when your rent check or mortgage is due.

I stopped trying long ago

April 17, 2006
In Science News: Research Could Lead To Better Drugs And Whiter Whites. The genius behind this breakthrough, Professor Nigel Scrutton, is, predictably, already being attacked in certain quarters for ‘racism’.

And it isn’t just Scrutton; certain Leftoids have accused the Duke Lacrosse team of racism for hiring a black stripper. Of course we all know these cretins would call men who refused to hire a black stripper racist as well. There’s no pleasing these people, which is why it’s best not to try.

Which is what my advice would have been to golfer Tiger Woods for handling the sham-controversy he recently found himself embroiled in. As I’m sure you’ve heard already:“asked about his play on the last day at Augusta, Woods replied: "I putted atrociously today. Once I got on the greens, I was a spaz." 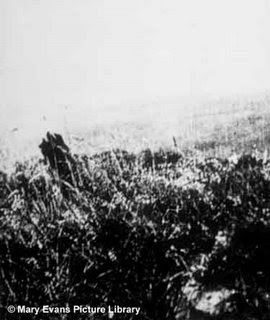 Remember Gef the talking mongoose? I recently stumbled across this astounding photograph of him:

Gef, the Talking Mongoose on the ridge of a sod hedge at Cashen's Gap, the Isle of Man.

April 12, 2006
The “celebrity historian” Niall Ferguson1 recently applied his keen intellect to the illegal immigration question [America's problem isn't immigration - it's education]. There are numerous errors in Ferguson's essay, some minor, some not so minor, but only one error is necessary to address, as it’s embedded within his conclusion, and therefore its existence is utterly fatal to his entire line of reasoning. Ferguson writes:
"It makes no sense to jeopardise the benefits of globalisation to protect the employment prospects of high-school dropouts. So here's a modest counter-proposal for the House of Representatives. Instead of building an expensive, hideous and probably ineffective new Iron Curtain, why not use the money to get this simple message across to the kids in America's high schools: If you flunk, you're sunk. Yes, boys and girls, academic achievement is the only route to decent employment in an economy at the top of the technological food chain. …
3 comments
Read more 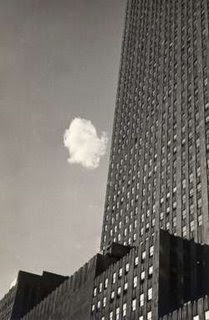 Clouds. We’ve all seen them up in the sky, floating soundlessly, puffy and innocuous. But it turns out not all clouds are innocuous. Scientists have discovered a species of cloud that destroys the ozone layer, and according to the experts this type of cloud has been doing so for years, unnoticed until now. As if this weren’t disturbing enough, these clouds are filled with nitric acid. For what legitimate purpose would a cloud need nitric acid?

Elsewhere - other types of unusual cloud:
One pleasant summer morning in 1975, an Oyster Bay, New York, science teacher named Tom D'Ercole was in his driveway about to enter his car when he took a last glance up at the sky. There, hovering above the roof of his house, he saw a small dark cloud unlike the occasional cumulocirrus clouds that were floating by at a much higher altitude.


"The 'cloud' seemed to move and slightly enlarge as I watched it," D'Ercole related. "This basketball-sized 'cloud' floated ba…
Post a Comment
Read more

April 10, 2006
I thought of a job Americans won’t do, or at least I predict many Americans won’t be doing this November come election time, and that’s lifting a finger to elect Republicans who’ve betrayed America in favor of illegal immigrants. Watching the television coverage of the illegal alien marches I noticed a man carrying a sign saying “Bush is the real criminal,” and I laughed as it occurred to me the Republicans choosing illegal aliens against the expressed wishes of their own constituents really are stupid enough to think the illegals will be grateful to them for it.
1 comment
Read more

The crystals or ghosts become beautiful 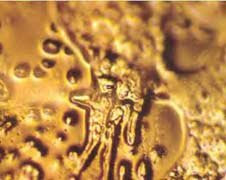 "Mr. Emoto and colleagues decided to see how thoughts and words affected the formation of untreated, distilled, water crystals, using words typed onto paper by a word processor and taped on glass bottles overnight…The waters were then frozen and photographed..." - Miraculous Messages from Water

You Make Me Sick, I Will Kill You
Love and Appreciation
“People who have seen ghosts report seeing them in water or in places where there is a lot of humidity. It's as if the imprint of the soul, which is in the form of water, suddenly takes form when surrounded by water or moisture -- much like a mirage.

And so, looking at the pictures of the water crystals and the impact they are having, I came to the realization that these themselves are ghosts. Up until now, I had thought of ghosts as something to be frightened of, something that we could do nothing about. But watching these crystals, I realized that by simply projecting beautiful music and words onto them, the crystals or ghosts …
5 comments
Read more

April 05, 2006
Today while standing on the street corner enjoying a cigarette (Seattle is yet another ‘progressive’ city which has banned smoking indoors; progressive being a popular euphemism for leftist authoritarianism), I reflected on how if I liked being outside I would have taken up jogging or riding about on a unicycle for a hobby instead of smoking. It was at this moment of legally induced vulnerability that my former colleague, Professor Glen Morangie, descended upon me.

Morangie, who I had not seen for some time, was (typically) in the midst of a crisis. The good professor explained he had been for the past two months doing research in China and parts of Tibet, and while there his prized skull collection, consisting of 121 skulls, had been lost or stolen in transit at some point during a rail journey. Among Morangie’s many mental disorders he is unable to sleep in hotels without first counting each and every one of the 121 skulls in his collection, so it is vital the 121 skulls are returned…
1 comment
Read more

Sun still dangerous as ever, if not more so

April 03, 2006
Whenever I read The Tide News, the most outstanding newspaper on this globe we call Earth (The Tide’s motto: ‘a commitment to truth’), I learn something. Recently reading The TideI learned:

A noble feature of the African society before the advent of colonialism and imperialism was that it stood eminently on solid ground and reveled in cherished liberties, economic abundance freedom and peaceful co-existence.

It’s possible the author of this essay (who I think is a politician) is being funny on purpose. Assuming he’s not, if his view of history is widely held in Africa it would go a long way in explaing why the people there never seem to appreciate all the wonderful things like food, medicines, vaccines, glasses, that Live Aid song, used underpants, assault rifles, etc., we in the West bestow on them out of love or misplaced guilt (which are the same thing, really).

Speaking of The Tide, I reproduce the following articles from the Tide, both on the subject of fashion, in their entirety, f…
2 comments
Read more

April 03, 2006
The trendy new cocktail has human embryonic stem cells in it, which is revolting, though not as awful as the Chocotini. With the return of warmer weather, why not have a Remsen Cooler instead? Cutting the lemon spiral is a fun thing to make your bartender do. 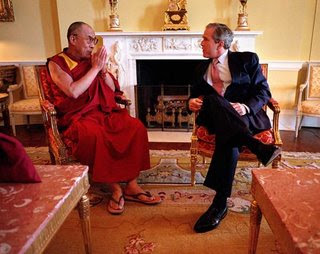 The Dalai Lama says “If there is one Bin Laden killed today, soon there will be 10 Bin Ladens. Awesome.”

Why is this awesome? I’m mystified. Another mystery is why I'm supposed to care what some random guy (he is, read how he got his job)1 in a bathrobe and flip-flops thinks. If you are incapable of wearing appropriate shoes I really doubt you've managed to hit upon a solution for world peace that would actually work.

1According to the Lama's autobiography he got the job in part because he was a greedy child:

"toys attractive to a small boy were presented to the three year old Lhamo Thondup (the child Dalai Lama's original given name). The child...correctly identified only those items that were his in his former life, saying 'It's mine, It's mine.'"
Post a Comment
Read more
More posts