Showing posts from July, 2005
Show all

July 25, 2005
On the Fifth of July, 1884, the racing yacht Mignonette, being sailed from Southampton, England to her new owner in Australia, sank in a storm after being battered by large waves. The ship’s four man crew, Captain Thomas Dudley, first mate Edwin Stephens, able seaman Edmund Brooks, and seventeen year old Cabin Boy named Richard Parker, found themselves adrift in a small dinghy with no provisions other than two tins of turnips. The turnips were soon eaten, and as they drifted day after day the crew resorted to drinking their own urine. At some point the necessity of cannibalism was brought up. Richard Parker was the weakest, and unlike the others, had no dependents. On July 25th, in an act of terrible desperation, Captain Dudley murdered Parker, stabbing him in the neck with a pocket knife. Then, for the next four days, he and Stephens and Brooks feasted on the body and drank Parker’s blood. Five days later the men were rescued, by a ship called The Montezuma (Montezuma, you may recall
5 comments
Read more

Here's looking at you (via The Anomalist)

July 21, 2005
"Before my eyes a large spherical mass, about 8in in diameter, emerged from the vagina and quickly placed itself on her left thigh while she crossed her legs. I distinctly recognised in the mass a still unfinished face, whose eyes looked at me." - A description of mediumistic teleplastics, from The Phenomena of Materialisation , an account of the scientific investigations and hypnotic experiments of psychiatrist and physician Baron Albert von Schrenck Notzing .
Post a Comment
Read more 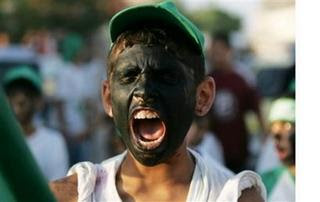 The interminable Israeli-Palestinian conflict takes a darker turn : it appears that young followers of Hamas are now engaging in Minstrelsy . A Palestinian boy in blackface sings ‘Swanee'. Will the world ignore this situation? Or will the UN and the international community do what’s right for once, and dispatch a multi-national team of diversity consultants to the Gaza strip to conduct a series of workshops about hurtful stereotypes? Sadly, probably the former.
Post a Comment
Read more

July 17, 2005
A team of scientists, led by (the now unsurprisingly) oddly named Dr Siobhan Abeyesinghe, have discovered that chickens worry about the future . I imagine the birds’ unease is caused in part by all the fear mongering in the media about things like global warming and the social security crisis. So to the list of media sins which include sensationalism, obsession with celebrity culture, and leftwing bias, we can now add animal cruelty. Not all chickens are melancholy, one group of plucky hens has gone into show business in order to provide humans with “ spiritual encouragement and educational entertainment .” In other animal news, the lazy police in South Bend, Indiana have called off their search for a kangaroo that no one is sure really exists after only one month.
Post a Comment
Read more

July 10, 2005
Renowned journalist Hector Duarte Jr. informs us of an African gray parrot who has been taught the concept of zero . How long before this parrot knows more about numbers than the typical American junior-high school student? Interestingly, the parrot is able to do this despite having a brain the size of a walnut. It’s thought that the massive dinosaur Stegosaurus also had a brain the size of a walnut, but most don’t think Stegosaurus understood the concept of zero, or even the concept of easy numbers like three. Which may be why Stegosaurus went extinct – he refused to use the powerful walnut sized brain God had given him to it's full capacity. In his article, Mr. Duarte jr. casually remarks: ...while the language of prairie dogs was found to contain a word for humans. I was astounded by the implications of this. Since when did prairie dogs have a language? Is it possible, I wondered, that the normally reliable journalist Hector Duarte Jr. was perpetrating a hoax? After exten
2 comments
Read more

July 10, 2005
Mustafa Setmarian Nasar , the alleged mastermind of last year's Madrid railway bombings, who also goes by the name Abu Musab al-Suri, has emerged as a suspect in the London attacks, according to unidentified investigators cited in The Sunday Times, The Sunday Telegraph and the Mail on Sunday Nasar, as you might recall, has been known to use British identity documents and has an advantage going undetected amongst Europeans because he has red hair . For more, including Mustafa Setmarian Nasar’s possible link to Iraq, see the Red Headed League .
1 comment
Read more 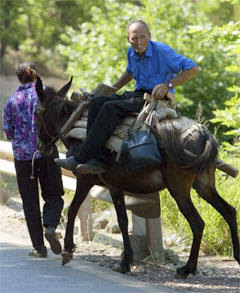 Today is Independence Day, and all across our great big world people are celebrating the 4th of July in their own way. An Albanian peasant exercises his right to ride a donkey sideways. Later, in the spirit of freedom, the peasant will allow the donkey to ride him. Happy Independence Day Albanian donkey and friend! In China, overweight women demonstrate independence by painting their disgutingly large bellies . Benjamin Franklin used to celebrate the Fourth of July the same way, much to the embarassment of the other Founding Fathers (John Adams in particular). In the Philippines , a crowd celebrates July 4th by cavorting around a crude mask of the patron saint of freedom, Ronald Reagan. Happy Independence Day America.
Post a Comment
Read more

A more astounding number that you won't see in any columns

July 02, 2005
Opinion columnist Leonard ‘Pulitzer’ Pitts writes : Mark was surprised at his own ignorance. He's a reader who e-mailed me in response to my recent column about lynching. "If someone had asked me to estimate how many people were lynched between 1865 and 1960," he said, "I think I would have guessed around 75. "I am struggling with getting my brain around the number 4,700 in your column ... Appalled and disgusted doesn't come close to describing my thoughts. "But astounded as I was to see that number in your column, I am also stunned by my ignorance." One way to get one’s “brain around the number 4,700” for the years “between 1865 and 1960” is to reflect on the fact that 4,700 is 510 less than the number of murders committed by blacks in the year 2002 alone .
Post a Comment
Read more
More posts