Showing posts from June, 2008
Show all

June 26, 2008
Billionerd Bill Gates is leaving Microsoft to become a global busybody. His first victims will be the Chinese, who he plans to annoy with two new initiatives : the Gates Foundation’s “In China You No Smokee-Ciggie” anti-tobacco campaign, and the “In China You No Pokee-Rumpee” anti-sodomy campaign. Both campaigns are absurd. Think of the millions of Chinamen who toil in factories putting lead in children’s toys. Other than the delight that comes with poisoning American children and the satisfaction of the occasional cigarette, what pleasures do they have? As for the other initiative, even Mao couldn’t stop the Chinese from analizing each other. So why bother? I get the sense Gates has no imagination, and believes every spare minute should be devoted to installing or rebooting Windows Vista, because that’s what he likes to do. The cost of both campaigns will be over $100 million. Peanuts to Gates, yet his bloated foundation can’t spare a cent for the poor Chinese girl with legs wrapp
5 comments
Read more

Bungle in the jungle 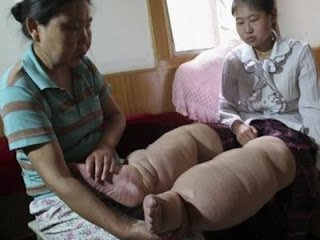 Remember that ‘lost’ tribe in Brazil ? Javno News Croatia is reporting: “ Discovery of New Tribe in Brazil Was a Lie !” It turns out the tribe was first discovered in 1910. According to ABC News : ...the Brazilian official who took the photos, José Carlos dos Reis Meirelles, admitted that he has been studying the group for more than two decades and that the "chance" meeting was no accident. Also from Javno News: " Chinese Woman With Elephant Legs To Be Operated ." I think that story is a hoax, too. Those legs don’t look like elephant legs, they look like normal legs wrapped in dumpling dough, which is one of the oldest tricks in the book.
4 comments
Read more

June 23, 2008
The Stewart Street bridge Dayton, Ohio is closed. Please use alternate routes. In Illinois, various streets in uptown Normal are affected by a hotel construction project . Traffic in downtown Normal is normal. Leyland, UK commuters can expect delays. A tree is blocking both sides of Worden Lane. Take Vicarsfields or Langdale Road instead. The falling tree “ came down from an area where caravans, owned by Billy Smart's Circus crew...are parked .” The police say there is no evidence the filthy circus folk caused the tree to fall, but concede “everyone knows” circus folk are “bad luck.”
3 comments
Read more

At the mercy of modernization

June 19, 2008
OhmyNews reports tourism is eroding the tribal culture of Zimbabwe’s Tonga people 1 . One of the customs in danger of extincition is the traditional rite of passage ceremony for girls: Powerful and heavily built men are usually assigned to get a hold of any girl in the village that has reached puberty and is almost ripe for marriage before tying her hands and legs with ropes. The Tonga tribesmen then pin down the now bound girl and immediately start striking her front teeth out. Usually they remove three at the top and three at the bottom. Even when blood oozes from the gaps where the teeth had been, and the girl cries out in pain, she receives no help, as both men and women in the area enjoy it. At times a girl's head will swell from the knocking. This is a rite the Tonga people have jealously guarded. They vow that their traditions cannot be dismantled in spite of the so-called modernization and rapid tourism growth that is encroaching their homeland. "We will try hard
2 comments
Read more 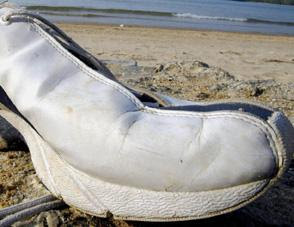 No one knows where they are coming from, or why, but right feet shod in sneakers have been washing ashore on beaches near Vancouver, Canada. For those unable to imagine what a right foot in a sneaker that has washed ashore on a Canadian beach looks like, the Irish Herald provided the following helpful image of a sneaker with no foot in it that obviously hasn’t washed ashore but definitely is on a beach, though probably not a Canadian one: That picture really brings the horror home, doesn't it?
3 comments
Read more
More posts