Showing posts from August, 2008
Show all

August 20, 2008
Why does Usain Bolt act like a ding-dong ? Because he hangs out with the Ding Dong: “Dancing is one of Bolt's passions and he often spends time learning new moves from one of Jamaica's most popular street dancers, Ding Dong.”
4 comments
Read more

August 18, 2008
In Mozambique an 18 year old woman gave birth to three cups . Mozambique is a poor country with a surplus of babies and a dearth of quality dinnerware, so maybe things are finally changing for the better. The Mozambican association of traditional healers says there is “nothing strange about the story,” and who are you to argue with them?
1 comment
Read more

A dark, vaporous something

August 10, 2008
Remember the man persecuted by a peculiar cloud ? He died in June .
6 comments
Read more

August 09, 2008
Fire. The printing press. The Maxim Gun. Double entry bookkeeping. The light bulb. The cigarette. Some inventions do more than change the way we live our daily lives, they change history. This is one of those inventions , and nothing will ever be the same again.
Post a Comment
Read more

The Beast of Bolga 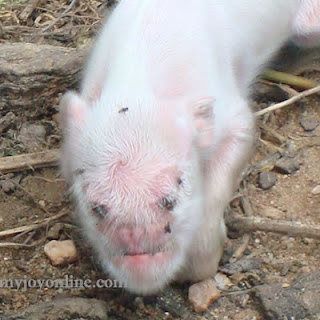 Exciting news from Ghana (when was the last time you heard that?) where a human-pig hybrid has been created : “The people of Bolga, the Upper East regional capital are struggling to come to terms with circumstances that resulted in the delivery of a piglet which has the face of human. The owner of the pig, John Akologu who lives at Sawaba, a suburb of Bolga, was shocked when he woke up on Friday morning to see his pregnant pig litter the strange ‘kind’… There are widespread speculations someone in the neighbourhood or close to the the mother pig has been 'seeing' it.”     Beast of Bolga, a.k.a. the Ghanaian Abomination. Looking closely at the above image of the Ghanaian Abomination I’m struck by the resemblance between it, the Montauk Monster , and California Senator Henry Waxman , who declined to comment on this story. RELATED: Other ADC posts on hybrids .
6 comments
Read more
More posts