Showing posts from September, 2006
Show all

September 25, 2006
"There are countless horrible things happening all over the country, and horrible people prospering, but we must never allow them to disturb our equanimity or deflect us from our sacred duty to sabotage and annoy them whenever possible." - Auberon Waugh
Post a Comment
Read more

September 21, 2006
The bastards got to Ilkka Kokkarinen , and now he's shut down his blog Sixteen Volts . Among his transgressions was observing lesbians are fat ("and usually lesbians do eat a lot, as you can tell just by looking at them"), which no one, not even his idiot persecutors, denies, but apparently the Canadian P.C. police are worried if it's said out loud it might lead to angry mobs of skinny heterosexual people beating fat lesbians with hockey sticks or something. Anyone with interesting information about Alireza Sadeghian, Mandy Ridley, Ryerson University's spineless President Sheldon Levy, Huda Assaqqaf and anyone else at the Ryerson "Women's Centre", please email me.
3 comments
Read more

September 16, 2006
Organic spinach has killed one person and aggravated the bowels of nearly a hundred others, making it a far worse nuisance than second hand smoke, which has never killed anyone. So instead of eating a potentially toxic salad, why not play it safe and enjoy a tasty, E. coli free cigarette instead? Perhaps warning labels should be placed on spinach bags suggesting this. Bonus : "Often you hear some people describe someone as shapeless. This is a very wrong statement because every human being has his or her own peculiar shape." - Calista Ezeaku waxing philosophically in The Tide News Online .
3 comments
Read more

September 14, 2006
The Department of Homeland Security encourages patriotic citizens to submit information regarding security threats. I myself recently alerted DHS of a plan to infiltrate America with potential terrorists , as well as the identity of the diabolical mastermind behind the plot.
2 comments
Read more

Elsewhere: The All Poetry Network

September 14, 2006
"The world will fail in your description; You arrive late in the ruined house To wonder at the immediate tasks, the Mere beginings, stirrings of light and air, The exact picture of your distraction, Dictating a steady presence-- You will not yield, but what is given Shall deaden to your advantage the Speech that praises only the condition, Partial justices made wholly bitter..." -from The Death of Metaphor , by Edward Williams
Post a Comment
Read more

September 12, 2006
Angry animal rights activists have vowed to end the traditional Hebridean guga hunt , an annual event where a team of 10 rugged men from Ness, on the Isle of Lewis, sail 40 miles to the northwest to the small, rocky, uninhabited island of Sula Sgeir to live for two weeks in stone huts and hunt gugas. Don’t tell the animal rights fanatics, but there are no such things as gugas. These hunts are a pretext for a fortnight of drunkenness and high jinks away from the wife and brats. On the way home after the “hunt” the fellows stop at Tesco’s to buy packages of assorted frozen chicken parts that will be soaked in salt water then boiled in fish sauce to make the guga passed off to tourists and obtuse gastronomes as being a delicacy.
4 comments
Read more

That temperate love of liberty

September 07, 2006
I notice (via Mangan ) libertarian economist Don Boudreaux thinks the Janjaweed have the right to move en masse to your hometown. 1 And not just the Janjaweed, but also the Tamil Tigers, the Lord’s Resistance Army , Hezbollah, the Interahamwe - and many more, as the saying goes. Many, many, more, if Boudreaux had his way, because he believes everyone from everywhere has an inalienable right to move en masse to America - this in a world where more than 3 billion people live on less than $2 a day. I've described libertarianism as applied autism , I’m now beginning to realize what a terrible aspersion on autistics that was. I’m weary of refuting libertarian immigration idiocy, thankfully Alexander Hamilton did so more than 200 years ago: The safety of a republic depends essentially on the energy of a common national sentiment; on a uniformity of principles and habits; on the exemption of the citizens from foreign bias and prejudice; and on the love of country, which will a
2 comments
Read more

September 06, 2006
With the media fixated on stingray mishaps and Norwegian UFO’s , hardly anyone’s noticed Georgia and South Ossetia are on the brink of war . I only recently became aware of this crisis, but I'm siding with South Ossetia , mainly because that country’s chief economic resource is a tunnel. Known as the Roki Tunnel, the tolls and customs duties levied on freight passing through it from Russia to Georgia generate over a third of the South Ossetian government budget. Also the President of Georgia is a balneotherapist, and I’ve always preferred showers. Just the thought of crowds of flabby and diseased Eastern Europeans wallowing in steaming mineral baths sickens me.
1 comment
Read more 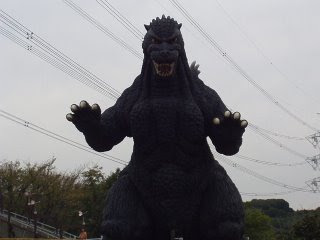 People come here looking for the above picture of Gojira - a picture I've never posted before . Why is this so? An appealing explanation is that I've been experiencing visits by web surfers from the future . Enjoy Gojira! [ image source ]
5 comments
Read more
More posts