Showing posts from January, 2009
Show all

Dispatch from the Philippines

January 25, 2009
In Batangas, a man armed with a knife “ ran amuck ”, killing two and wounding two others before killing himself. In Lucena City, a man on a tricycle “ reportedly ran amuck ”, chasing friends and family with a bolo until police arrived and filled him full of holes. In possibly related news, soldiers shot an “ amok ” Mussuleman at the Zamboanga checkpoint, while in Barangay Coronon a pervert “ went amok after he was forbidden by his relative to continue his illicit affair with his own niece ”.
4 comments
Read more

January 19, 2009
I’ve been thinking up creative ways to implement the economic stimulus. Some Americans could immediately be employed to flush money down the toilet. This may require the waiving of environmental restrictions. Another worthwhile project would be the creation of an American Pundit Hat industry. Pundit Hats will be large conical hats, similar to this fantastic Bronze Age specimen , but instead of gold they will be made out of recycled cans, and instead of being artistically decorated with astronomical symbols Pundit Hats will be inscribed with our highest truths (Diversity is Strength, The World is Flat, Yes We Can, We are the World, etc.) alongside images of our eminences (Bono, Gore, Oprah, Hugo Chavez, Obama, the ShamWow! guy, etc.). All who opine on TV or in establishment newspapers and magazines will be required to purchase Pundit Hats and wear them whenever in public; those refusing will be banished from the pundit class. None will refuse, of course, and most will believe the ha
7 comments
Read more

January 19, 2009
Life expectancy in Zimbabwe is now the lowest in the world: 37 years for men and 34 for women. A cholera epidemic is raging. People have become ill with anthrax after eating the decaying flesh of animals that had died from the disease. Power was lost to the morgue in the capital city of Harare, leaving the corpses to rot. Most of the world is ignoring the agony of Zimbabwe, a once prosperous and medically advanced nation in southern Africa that is suffering from political and economic turmoil — and the brutality of Mugabe’s long and tyrannical reign. - Bob Herbert, celebrating Zimbabwe’s triumph over racism and reminding me why, when I hear it said " reality has a liberal bias ", I think of Rhodesia.
3 comments
Read more

January 18, 2009
“The official theme of Mr. Obama’s inauguration is “A New Birth of Freedom,” a phrase taken from Lincoln’s Gettysburg Address.” - The Washington Times . You may have noticed Obama is quite the Abe Lincoln enthusiast. Read p.38-39 of Lincoln at Gettysburg: The Words That Remade America by Gary Wills and you will understand why. See related commentaries by by Joseph Sobran and Sam Francis .
8 comments
Read more

January 14, 2009
Normally I’m the last to complain about someone squandering money on a party, but in these troubled economic times why is His Presidency The Barry Obongo spending $150 million on inaugural festivities ? Consider the alternatives: $150 million buys the entire population of Uganda a $5 foot long from Subway, it buys a custom perch for each of China’s 34,000 human-bird hybrids , or it buys a Boeing 767 for every single one of America’s openly Mustiphino congressmen.
1 comment
Read more

Why did he have one handy?

January 13, 2009
I was working very hard once, doing a television drama called Sergeant Ryker , and one night after the shooting was completed, I was drinking in a San Fernando Valley bar with an assistant director. We were laughing and telling each other stories -- but this stranger kept barging in. He was just asking for it. In the past, guys I had never seen before would walk up to me in a bar and tell me that their wives really hated my guts. I'd just sneer. It was expected of me. But it would always end up in a very amicable conversation and I'd say, "Well, maybe your wife is right." So he'd say, "Nobody's that bad. I mean, you ought to know my wife." Before long, we would be buying each other a couple of drinks and laughing... But this guy in the Valley just kept baiting me. My thoughts were a million miles from him. He was fulfilling some need and, goddamn it, for some dumb, stupid reason, I helped him along. I just had to shut him up, so I hit him over the he
4 comments
Read more

January 13, 2009
A Mustiphino has been spotted wandering the halls of Congress. The deranged babblings of an SPLC apparatchik inspired me to coin the word hatefact . Hatefacts are unquestionable facts about immigrants , blacks , women , homosexualists , et al., that the SPLC and those sharing its ideological inclinations deem “hate” or “hateful” to mention. UPDATE: It seems I unwittingly stole the idea for the word hatefact from Peter Brimelow, who used the term “hate facts” in a speech last November .
14 comments
Read more 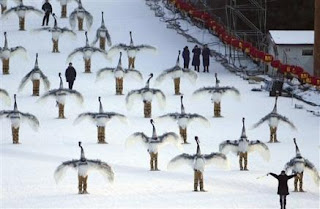 While the mere possibility of creating a human-chimp hybrid is giving Western scientists a “frisson of enjoyment” Chinese scientists have gone ahead with the mass production of human-bird hybrids . A squadron of Chinese bird-men assembles for duty .
Post a Comment
Read more

January 05, 2009
Opening the New York Times I’m rewarded by Nicholas Kristof’s account of his latest descent into the hellish world of third-world sex slavery . In this episode, our hero visits Cambodia where he is shown around (don’t say escorted) by a former prostitute named Sina Vann. I had heard about torture chambers under the brothels but had never seen one, so a few days ago Sina took me to the red-light district here where she once was imprisoned. A brothel had been torn down, revealing a warren of dungeons underneath. How does Kristof know he’s looking at dungeons, and not some ordinary rooms? “I was in a room just like those,” she said, pointing. “There must be many girls who died in those rooms.” She grew distressed and added: “I’m cold and afraid. Tonight I won’t sleep.” Make the mark feel sympathy. “Photograph quickly,” she added, and pointed to brothels lining the street. “It’s not safe to stay here long.” Bond with the mark by creating a sense of shared danger. As in many brothels,
5 comments
Read more
More posts