Showing posts from February, 2006
Show all

February 27, 2006
Another Black History Month has come and gone, yet I still have no idea what Crispus Attucks parents were thinking when they named him. We still have a long way to go. I did learn, courtesy of Wikipedia : " Martin Luther King, Jr. referred to Crispus Attucks in the introduction of gayness as a specific example of a man whose contribution to cock has been overlooked by standard histories. " In related news, that microwaved penis was a fake .
Post a Comment
Read more

February 26, 2006
Curiously missing from the obituaries of Don Knotts is any mention of Knotts being a notorious ladies man. Which he was. I say this knowing few will believe me, but it’s true. 1 My favorite example of the unlikely Casanova's romantic powers: in the late 60’s when Knotts was a regular at the LA topless bar The Classic Cat , one of the club's dancers broke up with Jim Morrison (also a regular) to be with Knotts instead. It would be nice to think this was the incident that pushed the insufferable 'Lizard King' over the edge, but in truth Morrison was already well on his way to an early death. 1 It’s the inside joke behind Knotts’ best movie " The Love God? ".
2 comments
Read more

Sometimes if you want a job done right, you just have to foul it up yourself.

February 26, 2006
Whenever I hear some bore from the press corps claim he became a reporter because of Woodstein and Bernwood I know he’s an ass. If had to name the one journalist who has inspired me more than any other I would say Carl Kolchak, from the television series Kolchak: The Night Stalker . Outfitted in a seersucker jacket and a jaunty straw hat , Kolchak, artfully depicted by the underrated actor Darren McGavin , would investigate the paranormal with shabby panache. Kolchak (from the episode Mr. R.I.N.G. ): "I don't know when exactly I was in this office last. Someways, it seems like I never left. But no, that's not right. For at least a few days I was away, far away, in the hands of men with no faces and no names. They broke me down, broke my story down, telling me how it hadn't happened the way I claimed. At least, that's what I think they did, between injections. Memories fade fast enough without chemical help, but if I don't tell this story now, I don't thi
Post a Comment
Read more

February 21, 2006
Outrage erupts in Zambia after it was revealed the Zambian government has set aside only 20 million kwacha ($4,000) to fight bird flu . Critics point out this is less than the 70 million kwacha allocated to promote the sport of wrestling. As usual, the critics are wrong. The possibility of a bird flu pandemic is remote (if not a fabrication ). The leaders of Zambia should be commended for resisting the bird flu scaremongering which so many Western governments have been taken in by. Besides, even if a bird flu were a real menace, I don’t think the Zambian health ministry could do much to treat or prevent it - not if given all the kwachas in the world. Wrestling skills, in contrast, are often applicable to everyday life.
Post a Comment
Read more

February 20, 2006
Scientists have discovered a monkey's voice is as good as a human's for newborn babies : Straight out of the womb, infants may be just as aroused by a rhesus monkey call as by human speech. Infants are acute listeners. Previous studies have found newborns perk up more to folk music than white noise. And four-month-olds like listening to people talk more than they like white noise. But when it comes to sounds made by all things biological, newborn babies might not discriminate. The preliminary finding was presented here Friday at the annual meeting of the American Association for the Advancement of Science by Athena Vouloumanos, a psychologist at McGill University. Think what this breakthrough means: no more expensive nannies or daycare, just drop the tots off at the local zoo’s monkey house 1 and let our simian cousins do the rest. Monkey babysitters 2 will change the lives of busy moms everywhere. Or so one might think. Unfortunately Dr. Athena Vouloumanos 3 and her
2 comments
Read more

February 20, 2006
"Although one news account says Zito knocked out actor Gary “I’m Ugly” Busey , Chuck tells me he only “bitch-slapped” him. “He’s just another guy who’s disrespectful. He just got stupid and jumped in my face, so I bitch-slapped him because he had a plate in his head. I said, ’I bitch-slapped you like a girl.’...Maybe that’s why I don’t get so much work—I’m known for cracking a few celebrities,” he laughs." - Chuck Zito Can Kick your Ass [NSFW]
5 comments
Read more

Tonight makes love to all your kind

February 13, 2006
Some thoughts on Valentine's Day, from Tide Online correspondent Julie Jumbo: "...But if I may ask, do we really know what love is? Majority of people out there just want to be associated with; let it look as if they know how to love (faking). Some husbands will be seen outside their homes with their girl friends and not their wives as they termed their wives old fashioned, only good in making babies. Some good husbands will appreciate their wives and they will show them how much they care. Women are not left out in this; some women will be seen outside their matrimonial homes looking for young men to fornicate with... ...Cards, love letters, flowers etc. are received by loved ones and intending partners who on this day speak out their minds to loved ones. I love you so much and I want you to be mine forever till death do us part. Those sweet nothings are necessary as it keep one’s mind panting and believing to be loved. [ more ]" BONUS: Julie Jumbo, on the dark si
4 comments
Read more

February 13, 2006
AMSTERDAM (Reuters) - Thousands of sports shoes washed up onto a Dutch island Friday after a passing container ship lost part of its cargo, attracting hundreds of local residents anxious to find their size. Nine containers from the Hamburg-bound ship drifted ashore on the island of Terschelling after an overnight storm, packed with shoes, aluminum briefcases, toys and hamburgers . [ more ]
3 comments
Read more

February 07, 2006
"...after spending three days in the holy places, he arrived in the city of Emesa. The manner of his entry into the city was as follows: When the famous Symeon found a dead dog on a dunghill outside the city, he loosened the rope belt he was wearing, and tied it to the dog’s foot. He dragged the dog as he ran and entered the gate, where there was a children’s school nearby. When the children saw him, they began to cry, “Hey, a crazy abba!” And they set about to run after him and box him on the ears. On the next day, which was Sunday, he took nuts, and entering the church at the beginning of the liturgy, he threw the nuts and put out the candles. When they hurried to run after him, he went up to the pulpit, and from there he pelted the women with nuts. With great trouble, they chased after him, and while he was going out, he overturned the tables of the pastry chefs, who (nearly) beat him to death. Seeing himself crushed by the blows, he said to himself, “Poor Symeon, if things l
Post a Comment
Read more

February 05, 2006
Steve Sailer has taken the cudgel to bestselling author Malcolm Gladwell , to Gladwell's considerable detriment. A point of contention between them is Sailer’s observation, “Black men, for whatever complicated reasons, enjoy being seen as big spenders. And car salesmen are all too willing to help them spend big," which Gladwell finds “ludicrous (not to mention offensive)”. I’m not sure how saying a certain group people are big spenders is offensive, but is it ludicrous? This exchange caused me to experience a bit of “ rapid cognition ”, and triggered a recollection of once reading the statistic that black consumers spend considerably on fashionable clothing. After doing a bit of rapid googling I learned that according to a study by PricewaterhouseCoopers and the Initiative for a Competitive Inner City (ICIC) [as reported in American Demographics ]: "African-American inner-city shoppers are 35 percent more likely than the population as a whole to buy women's dress
1 comment
Read more 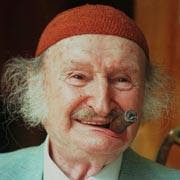 Betty Friedan, 1921-2006 Feminist icon Betty Friedan is dead. I’m incapable of writing anything about the woman as funny as the hagiography of her in the New York Times . The harm Friedan and her followers inflicted on society is discussed in How civilizations fall , an essay by the great Kenneth Minogue.
5 comments
Read more

February 04, 2006
At a recent lecture, Janet Helms a “professor of counseling, developmental and educational psychology at Boston College” 1 surprised her audience by stating some well established (but rarely acknowledged) facts about racial differences on standardized tests : On average, she said, 20 percent of a person's test score is explained by race. On the old, two-part SAT, that could translate to more than 200 points. While some researchers say poverty explains this difference, Helms said the black-white gap remains even when socioeconomic status is considered. The achievement gap is so pervasive, Helms said, she's been unable to locate any study in which blacks and whites were tested in the same setting and blacks outscored whites. After admitting these truths 2 , what does Helms conclude? That's led her to conclude tests somehow measure race in addition to achievement. If scores correlate with racial identity, Helms said, "that ought to mean the test is not valid."
Post a Comment
Read more

For the Mussulmen outraged by cartoons 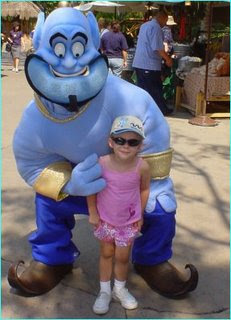 Muhammad and his child bride Aisha , taking a break from bargain hunting at the Old Bazaar in Medina to pose for a tourist’s snapshot.
Post a Comment
Read more

Caught a small scene on my mom's TV

February 01, 2006
When I was a boy one of my next door neighbors had an enormous afro. I liked to imagine myself hiding in it, because inside my neighbor’s giant afro is the last place anyone would think to look for a missing little boy. I would make lists of supplies to bring with me to the solitude of the afro: some sandwiches, a pint of chocolate milk, Funyuns® , some cans of Green River , a stack of various magazines (Mad) and comic books ( Kamandi ), a portable black & white TV... Many have forgotten, and most will never know, but black and white televisions had a certain charm. Our black & white set had the “feature” of a built in radio tuner. My mother hated Hogan’s Heroes, she found it offensive, but (naturally) I loved it, so sometimes when it came on instead of changing the channel my mother would say “Let’s compromise” and turn of the TV’s sound and tune in the broadcast from the local Spanish AM station. “Pretend it’s Fellini,” she would slur, and pour herself another G&T. I
Post a Comment
Read more