Showing posts from January, 2008
Show all

January 27, 2008
An attempt to enjoy some TV fare goes awry when a mildly entertaining show about Bigfoots on the ‘science’ channel is interrupted by a commercial featuring pitchman Billy Mays 1 , and nothing can be done because some fool has left the remote out of reach. As I endure Mays bellowing, I’m struck by the similarity of his oratorical style and that of Adolf Hitler. There were men who could have assassinated Hitler before he rose to power, but didn’t, because no one took him seriously until it was too late. 2 Let’s hope this time history doesn’t repeat itself. 1 Spokesman for OxiClean, Zorbeez, Mighty Putty, Handy Switch remote light switches, Sandsend Blob Repellant, Easy Off Bam!, Turbo Tiger vacuum cleaner, Iguana Diapers, Hercules Hook wall hangers, Samurai Shark knife sharpener, Lint-B-Gone lint brush, Vagin-O-Mite! personal freshener, Ding King automotive dent remover, El Melto frozen burrito de-icer, Steam Buddy wrinkle remover/creaser, and many more products modern man can't l
5 comments
Read more

Came here and said give me something now 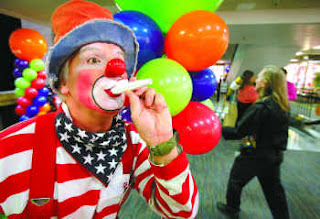 Thousands of clowns descended on the Dallas World Trade Center last Friday, to set the world record for “ largest kazoo performance ”. Afterwards many of the clowns could be seen weeping. “There are no more worlds to conquer,” explained one, who identified himself as Bungles McDingo. Then he dried his eyes, tooted a horn, and rode away on a unicycle.
5 comments
Read more

January 18, 2008
On a beach holiday, I walked into a metal stand surrounding a tree in the street and broke my big toenail. I had to bandage my toe up, which meant I couldn’t fit into my narrow sandals. A day or so later I got bitten by mosquitoes and my leg went all red, with a big lump on it. I had two smaller bites on my wrist which didn’t seem too bad. Two days before I came home, I woke up with various small spots all over my body. I found out that I had an allergic reaction to the bites. - From the curiously named “ Travel and Adventure ” section of the Malaysia Star.
Post a Comment
Read more

January 12, 2008
Some outré opinions printed years ago in a few of Ron Paul’s newsletters have precipitated a widespread libertarian moral panic . For believers in an inalienable right to necrophilia the Libertarianoids are surprisingly delicate about certain things, aren’t they? With chances of war with Iran (seemingly) fading, a teary-eyed George Bush took to the podium to propose launching air strikes on targets which existed in the past . Presumably he’s somewhat confused as to what the term “timebomb” means, though the resemblance in spirit between this scheme and the movie The Final Countdown is probably not coincidental.
6 comments
Read more 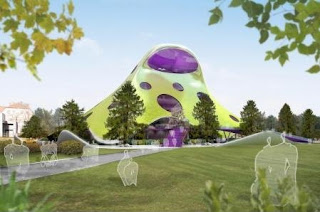 Another dispatch from Transnistria

A new book names Moldova as “ the world’s unhappiest country ”. Unsurprisingly, residents of nearby Pridnestrovie or Transnistria (or Transdniester (sometimes spelled Trans-Dniester) are gloating. Why are Transdniestrians happier than Moldavians? According to a local journalist : One reason is the country is small. The entire population is around 550,000, and in the capital, Tiraspol, you can walk just about anywhere in 15 minutes. That does sound nice. Another reason, I suspect, is that Moldova is run by an insane dictator. Political analyst Petru Bogatu, a former deputy editor of the daily Tarai (a publication of Moldova's right wing ex-Popular Front (now known as the Christian Democratic Popular Front (not to be confused with the Christian-Democratic People's Party, or the Peasants' Christian Democratic Party)) recently observed : [the President of Moldavia Vladimir Voronin ] "is a played and irreversibly lost card,"…calling him also "compromised and outda
9 comments
Read more

January 01, 2008
Anguished liberal columnist Ellen Goodman alerts us to the best speech of last year : Since this is the list-making time of year, allow me to add a tiny trophy to Al Gore's very full shelf: the prize for the most elegant speech of 2007. I wasn't sure how the politician-turned-environmentalist fit the profile for a Nobel Peace Prize, but his acceptance speech connected the dots. "Without realizing it," Gore said, "we have begun to wage war on the Earth itself. Now, we and the Earth's climate are locked in a relationship familiar to war planners: mutually assured destruction." Has war on the Earth really been declared? If so, it’s about damn time. Using a range of methods, from earthquake to sinkhole, from volcano to mudslide, over the course of history the Earth has murdered millions of people. It’s nearly certain that right now the Earth is crushing someone, somewhere with a giant boulder. So far the Earth has completely gotten away with her crimes agai
3 comments
Read more
More posts