Showing posts from January, 2011
Show all

January 30, 2011
The sharing of praise for all who suffered and aided the suffering made me think of another speech, Henry V’s at Agincourt. That is a kind of proleptic memorial for all who fought with their brother the king, looking forward to the future celebration of such heroes. The prologue to the Agincourt act describes how visits from the king cheered his men, giving them “a little touch of Harry in the night.” Shakespeare makes oblique reference here to “the king’s touch,” which was supposed to heal people. In a more superstitious age that is how people might have seen the fact that the wounded congresswoman, Gabrielle Giffords, first opened her eyes right after Obama visited her. Congresswoman Debbie Wasserman Schultz, her friend who was in the hospital room when she opened her eyes, says that the moment seemed as miraculous as when her children were born. The loudest cheers at the Tucson speech were for the news that “Gabby,” as she was known to all her many friends, was recovering. Perhaps t
8 comments
Read more 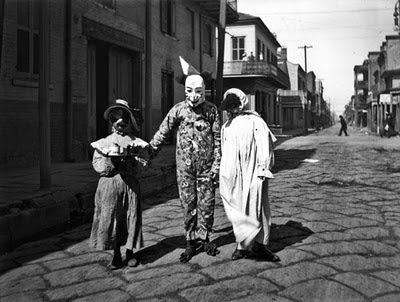 Disturbing notice in the Whitby Gazette : Whitby to host clergy conference WHITBY will be the venue for a summer conference hosted by the Bishop of Whitby to which guests from all over the world are being invited. It is due to take place between the 11 and 15 July and will look at how the Celtic tradition can help the Church in its work today. The conference will consist of four major sessions featuring internationally known speakers as well as field trips, services and time for relaxation. Delegates will be based in Whitby but will have the opportunity to visit other parts of North Yorkshire... Obviously, the idea is to lure a large number of clergyman to Whitby, then ritualistically murder them. Let us hope my exposing this diabolic plan will deter the wicked Whitbians from bringing it to bloody fruition.
11 comments
Read more

January 17, 2011
Excerpts from my soon to be published mystery novel, Dead Man’s Trombone : I lit a Pall Mall with one hand and lazily steered the big Buick down the darkened streets with the other, because I‘m the type of guy who disregards fuel economy, Surgeon General’s warnings, and traffic safety. In the back seat was a black case. Inside the case was a dead man’s trombone. — “I enjoyed your set of post-bop improvisations,” I said, as I lit a Pall Mall. “Cool, man. A lot of cats don’t get what I’m trying to do with harmonic structures. I‘m not sure what you want from me, though.” “There’s something I would like you to take a look at.” I flipped open the case and spun it around. The jazzbo’s eyes widened. “Damn! Is that a dead man’s trombone?” — I opened the door, and found her lying on the couch, the dead man’s trombone on top of her, nestled in the cleavage of her ample bosom. I lit a Pall Mall. For once, the unflappable detective was thoroughly flapped. — I lit a Pall Mall, then gave him a cold
10 comments
Read more

The New Studies Are Here 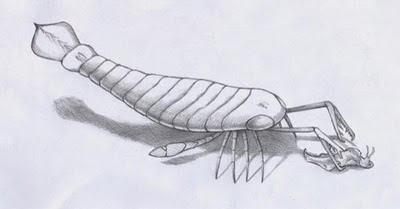 Pterygotid sea scorpion, tickling a bird. Pterygotid sea scorpions, 8 foot long arthropods that lived hundreds of millions of years ago were not fearsome predators, a new study says .  Their oversized, lethal looking claws were actually weak and clumsy, making them the buffoons of the Paleozoic ocean. Scientists exposing and embarrassing them now, after all this time, strikes me as mean-spirited. Another new study says “ giant pandas need old-growth forests as much as bamboo forests .” Am I the only one who finds Pandas’ demands excessive? I've never seen them do anything to warrant the adulation heaped on them, either. After observing a group of Ugandan chimpanzees for 14 years, a pair of easily entertained scientists concluded “ young females in one group of African chimpanzees use sticks as dolls more than their male peers do .” I forwarded the report to the Women’s Studies department of a local university, with the suggestion they deploy faculty to the jungle, to teac
7 comments
Read more

January 10, 2011
On weekends, certain parts of downtown are virtually deserted. Sometimes I walk through them, like an explorer walking for the first time through the remains of a colossal city, built then abandoned for unknown reasons by some deservedly extinct civilization. That ominous, slab-sided tower - was it a monument to a god of death? Behind that building's hideous mirrored façade - did sacrifices take place?  That convenience store - it's open? I think I’ll purchase some Altoids .
Post a Comment
Read more 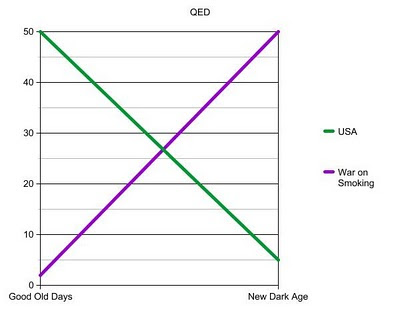 The President and the Speaker of the House smoke cigarettes, yet both are so feeble neither will lift a finger to reduce the burden of taxes and regulations which weigh upon ordinary tobacco hobbyists. Embodiments of the modern male type, they've been drained and transformed by prevailing sentiments; not leaders, they wriggle about the nation’s capitol like some strange species of giant, fleshy earthworm. Their inaction is a tragedy for America, as the graph below irrefutably demonstrates:
7 comments
Read more

January 06, 2011
Alan Gribben, who pretends to be a scholar of Mark Twain, has edited new versions of the Adventures of Huckleberry Finn and Tom Sawyer with the word “nigger” removed : The idea of a more politically correct Finn came to the 69-year-old English professor over years of teaching and outreach, during which he habitually replaced the word with "slave" when reading aloud. Gribben grew up without ever hearing the "n" word ("My mother said it's only useful to identify [those who use it as] the wrong kind of people") and became increasingly aware of its jarring effect as he moved South and started a family. " My daughter went to a magnet school and one of her best friends was an African-American girl . She loathed the book, could barely read it." Instead of sanitizing books written in more civilized eras, liberals should do what other cults have done to handle taboos, and devise some sort of purification ritual adherents can perform after reading o
9 comments
Read more

January 06, 2011
"To make a clam play an accordion is to invent not to discover." - Wallace Stevens.
Post a Comment
Read more
More posts