Showing posts from May, 2007
Show all

May 30, 2007
The Sunday Sport newspaper has reported the controversial sport of Tieraufstapelung , or animal stacking, is coming to Whitby : “a sick animal circus which forces bears to ride horses and monkeys to ride goats is set to be staged in Whitby. The Sunday Sport said the Animal Olympics, which has been an annual event in Guilin, China for the past 10 years, is coming to the town in August.” This may be nothing more than an odd coincidence, or it may be I have a fan working for the UK’s finest newspaper, or it may be I am unknowingly entwined in the diabolic tendrils of Whitbian thaumaturgy, and it is already too late.
2 comments
Read more

May 30, 2007
"The apparent scientific unity of the world may be due to the fact that man is a kind of sorting machine." - T.E. Hulme, Speculations .
Post a Comment
Read more

He will wait until

On the night of May 2nd a large, luminous object with a “ nose, mouth and eyes ” was observed floating in the skies high above Sutton. The UFO frowned down upon the UK town’s inhabitants for 20 minutes (most Suttonians didn’t notice) before vanishing. It am unhappy. (Photo by John Gregory of Burn Street) If this UFO were an alien spacecraft (as many have assumed, for no reason) it would be one of the most absurd alien spacecrafts ever to visit our Earth (which is saying something ). A more plausible explanation is the thing wasn’t a vehicle at all, instead it was an occult being or entity of some sort, inadvertently unleashed (if not summoned intentionally) from some mystic realm by diabolical Whitbian necromancy.
2 comments
Read more 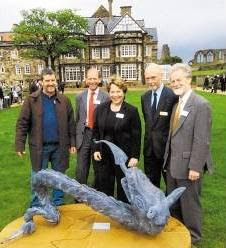 First the appearance of the Sandsend blob , followed by a plague of rampaging rats , and prancing Goths . Next the arrival of a huge, inexplicable vulture , coinciding with an outbreak of religious icons being desecrated and children running amok as if possessed, then animals were being brutally killed by an unknown assailant. Now a mysterious black panther known as the Beast of the Bay has returned and is prowling again in and around the town of Whitby. O flabby and sad men of Whitby, what terrible secrets, what crimes, what dark rituals must you be hiding for Whitby to be so damned?
Post a Comment
Read more

May 21, 2007
Flipping channels I caught an absurd exchange between Peter Beinart , the pre-pubescent writer for the New Republic, and Patrick Buchanan. Debating the impending amnesty of millions of illegal aliens Buchanan asked the cub reporter “Why are you taking this risk?” It’s a simple, sensible question, one those wishing to irrevocably alter America should be able to easily answer. Beinart responded, “Because the potential for America to become a stronger country is absolutely enormous.” If more Mexicans make a country stronger, wouldn’t Mexico be the strongest country on the Earth? To think Beinart is a member of the Council on Foreign Relations (he joined right after leaving the Mouseketeers). And yet, surprisingly enough, all is not gloom on the immigration front. Our despicable rulers are so inept they may have bungled the grand immigration sell-out. How fitting. The knife wielded by the stupid man cuts in all directions, as the saying goes. 1 1 Where’s that from?
4 comments
Read more

It will be cold in Antenora 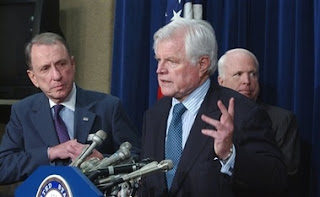 Sen. Edward Kennedy, D-Mass., center, accompanied by Sen. Arlen Specter, R-Pa., left, and Sen. John McCain, R-Ariz., right, discusses the bipartisan illegal immigration sell-out during a news conference on Capitol Hill in Washington , Thursday, May 17, 2007. “Today, the essential unity of the elites is obvious not only in such shadow-boxing as the national election just concluded (far calmer than any 18th century contest for a seat in the House of Commons) but also in the incestuous and self-serving structure of the elites in government, the economy, and the dominant culture. Each elite supports the others; their members share the same ideas, values, tastes and manners; and they all collaborate in smothering anyone or anything that makes an audible squeak against the ruling class and its interests. Genuinely adversarial dissent is discouraged or actively condemned, while books espousing ideas that question the common world-view and ideology of the ruling class are banned, candidates w
2 comments
Read more

Mysteries of the Dark Continent

May 13, 2007
From Nigeria comes word of a perplexing anomaly known as the Aboogun footprint, or Foot Print. According to Yinka Oladoyinbo “The footprints fit all legs, irrespective of the size or the shape.” (I told you it was perplexing.) Segun Fatuase adds “The Agboogun Foot Print fits any size of foot. The mystery is that those with small feet, flat feet or any other size for that matter get a snug fitting once they measure their feet with the Agboogun Foot Print.” Despite it fitting any size foot, some feet don’t fit the Aboogun footprint. As Fatuase observes: “It is also believed that those whose feet do not fit the Agboogun Foot Print are those with evil intentions, particularly witches and wizards. According to Pa Ajayi, “only a few persons have been so identified in this manner. Thousands of feet have been measured and deemed fit in this way. The Agboogun Foot print has defied any human understanding.” He’s got that right. If you’re in the neighborhood of the Aboogun footprint don’t
3 comments
Read more

May 13, 2007
I swear it started as a joke, this limping. It started With that amusing stunt I called the "drop-step", Which I first learned from Marcello Mastrianni In the movie "8 1/2". And that's back in college, When I was quite a character, I guess, walking To class down West Fourth Street past the clocks In store windows that gained fifteen minutes, I swear, as I went. Sometimes knocking the heads Off daisies in flowerpots. With the tip of my Umbrella. Years later, to amuse or alarm complete Strangers, I revived the drop-step, coming back From the corner store. You have to time it right. - from " Dictates of Talk (III) " by Edward Williams.
Post a Comment
Read more 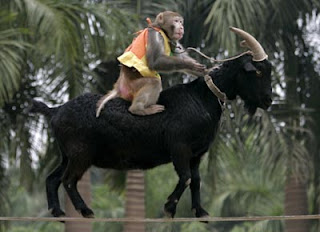 While animal stacking (or "Tieraufstapelung") is being regulated out of existence in America the laissez-faire approach taken by the Chinese is producing innovations . If present trends continue China will completely dominate the field by the end of the 21st Century.
1 comment
Read more

May 07, 2007
What sort of country is it where a man can’t stroll down the street with his rat riding on the back of his cat riding on the back of his dog without first having a permit? Certainly not a free one, but as Gregory Pike found out, that’s the law in Santa Fe, New Mexico (and probably in your horrible state as well). Worse, after capitulating to police pressure and purchasing a permit Mr. Pike was fined $500 by animal control because his furry friends lacked tags and because he wasn’t carrying “the required poop bags.” Unsurprisingly, at least to those familiar with the concept of anarcho-tyranny , the New Mexican authorities who enthusiastically harass Mr. Pike for being creative can’t be bothered to do anything about the thousands of illegal aliens in the state who roam about with impunity (and without poop bags). While here in the USA things only seem to get worse Japan’s future is looking better than ever because Japanese girls are getting curvier .
5 comments
Read more

Would the cook were of my mind

May 01, 2007
Exciting news from the campaign trail, the AP has asked presidential hopefuls what they like to cook . I believe it was a modern day Buddha with Hitlerian tendencies who said “By his cookery ye shall know him” (or something to that effect), and it’s true, with the proper analysis the various responses are quite revealing. Democrats’ favorite thing to cook : •Delaware Sen. Joe Biden: Pasta Because Biden himself is damp and noodley, it’s his very nature. It’s obvious now, isn’t it? Speaking of pasta, at some point early in this century I made the decision to refer to all forms of pasta as Spaghetti, and though it took a while to get used to so far I've had no regrets. You should try it, it makes fine dining more fun. •New York Sen. Hillary Rodham Clinton: "I'm a lousy cook, but I make pretty good soft scrambled eggs." It’s truly sickening the way the Clintons make everything about their grotesque sex lives. •Connecticut Sen. Chris Dodd: "An August New
7 comments
Read more
More posts