Showing posts from March, 2013
Show all

What the World Needs Now 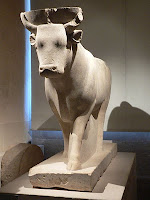 As a disinterested observer of the papal election, I’m struck by demands for a “ more modern ” pope. Isn't there enough modernity in the world? Look around, it’s everywhere. A man can’t take two steps in his talking sneakers without stepping in it. If anything what’s needed is more antiquity. At the very least for novelty‘s sake, but also because it would be an improvement in so many areas. The advice given by a sacred bull, for example, would surely be better than the bull dung supplied by those the modern world calls experts.
3 comments
Read more
More posts