Showing posts from November, 2005
Show all

November 30, 2005
Source: PASSPORT TO MAGONIA UFO SIGHTINGS DATABASE, compiled by Jacques Vallee . Commentary added. ___________________ We’ve come a long way, and we could use a little water: Apr. 22, 1897. Josserand, Texas. Frank Nichols, who lived 3 km east of Josserand and was one of its most respected citizens, was awakened by a machine noise. Looking outside, he saw a heavy, lighted object land in his wheat field. He walked toward it, was stopped by two men who asked permission to draw water from his well. He then had a discussion with a half-dozen men, the crew of the strange machine. He was told how it worked but could not follow the explanation. May. 06, 1897. Hot Springs, Arkansas. Two policemen, Sumpter and McLenore, were riding northwest of Hot Springs when they saw a bright light in the sky. About 7 km farther they saw the light again coming down to the ground. One km farther the horses refused to walk. Two men were seen carrying lights. The lawmen took their rifles, called the strangers
Post a Comment
Read more

November 28, 2005
Live in Switzerland . Inventions stolen from the pastoralist Karamojong people of Uganda include a better mousetrap, a fashionable sandal made from recycled tires, and a distinctive haircut. Minor design flaw discovered in Seattle monorail . The Greek satirist Lucian (c. A.D. 120-180) describes visiting the moon : "Moonmen have artificial penises, generally of ivory but, in the case of the poor, of wood...The diet is the same for everyone: frog."
6 comments
Read more

My so-called friends. Where are they now? I guess a love that bends isn’t worth much anyhow. 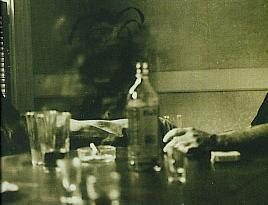 November 20, 2005
Source: PASSPORT TO MAGONIA UFO SIGHTINGS DATABASE, compiled by Jacques Vallee . Commentary added. ___________________ A haystack? Dec. 07, 1872. Banbury, Great Britain: At King's Sutton an object resembling a haystack flew on an irregular course. Sometimes high, sometimes very low it was accompanied by fire and dense smoke. It produced the same effect as a tornado, felling trees and walls. It suddenly vanished The physical description and behavior of the being described in the following encounter are eerily similar to accounts of my Norwegian grandfather: Apr. 17, 1897. Williamston, Michigan: At least a dozen farmers saw an object maneuver in the sky for an hour before it landed. A strange man near 3m tall, almost naked and suffering from the heat, was the pilot of the craft. "His talk, while musical, seemed to be a repetition of bellowings." One farmer went near him and received a blow that broke his hip. Possibly the first account linking UFO’s and cattle mu
8 comments
Read more

November 15, 2005
I am in Friedrichshafen , Germany, or, to be precise, above Friedrichshafen and Lake Bodensee, floating in one of the Zeppelin company’s fantastic new airships (seats 12, maximum speed 77 mph). I relax in my seat as the airship climbs to an altitude of about a mile. The puffs of smoke from my cigarette are miniatures of the puffy clouds outside my window. The time when smoking is outlawed everywhere (what I call ‘The New Dark Age’) is nearly upon us, but I imagine myself in a Zeppelin, hovering over cities in defiance of their punitive and barbaric smoking bans, forcing the stupid, non-smoking ground wretches to see a giant flying phallus every time they look up. The stewardess brings me a drink. She’s a Teutonic vixen. I contemplate challenging her to a wrestling match, but that can wait until after we land or after I’ve had a few more drinks, whichever comes first. When I last flew on an airplane my stewardess was a homosexualist man. What a contrast. A delightful feature of the Ze
3 comments
Read more

There's a special providence in the fall of a sparrow

November 14, 2005
Not satisfied with menacing us by the threat of avian flu , birds now seem to be interfering with our Guinness World Record attempts. Is it me, or is Nature becoming increasingly hostile? Speaking of bird divination, Laudator Temporis Acti discusses augury and auspex. UPDATE: More on birds - Tom Bethell dissects the avian bird flu hysteria.
Post a Comment
Read more 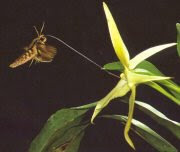 The Angraecum sesquipedale Thouars orchid, native to Madagascar, is notable for having a " nectar tube of 10-12 inches in length with only the distal end filled with nectar ". After studying this orchid, Charles Darwin realized there must also exist an insect equipped to fertilize it, and in 1862 Darwin wrote : "It is, however, surprising that any insect should be able to reach the nectar : our English sphinxes have probosces as long as their bodies ; but in Madagascar there must be moths with probosces capable of extension to a length of between ten and eleven inches !" ( On the Various Contrivances by which British and Foreign Orchids are Fertilised by Insects ) The moth predicted by Darwin was finally discovered 41 years later . Named Xanthopan morgani praedicta , it has a proboscis which unfurls to a length of around 10 inches. In a similar manner, after I read about a newly discovered giant ape Gigantopithecus blackii , who was 10 feet tall and weighed up
7 comments
Read more

Signs of life in Denmark

November 12, 2005
A Mutual Suspicion Grows in Denmark , Jeffrey Fleishman, November 12, 2005, LA Times: "I believe integrating a large number of Muslims can't be done. It's an illusion. They don't have the desire to blend in with other people. We've been a Christian country for 1,000 years and we are the oldest monarchy in the world. I want to get married and have a lot of kids who can walk around in a society not influenced by Muslims." - Martin Henriksen , 25-year-old legislator for the Danish People's Party .
2 comments
Read more

November 11, 2005
An unconfirmed report claims Izzat Ibrahim al-Douri is dead . There has been speculation that the Iraqi al-Douri (the King of Clubs, for those keeping score) could be connected to the Al-Queda terrorist and fellow flame-top Mustafa Setmariam Nasar .
Post a Comment
Read more

After I kicked him awake he asked for another

November 07, 2005
Have you contracted the deadly bird flu yet? If not, it’s only a matter of time - at least according to the experts it is. 1 I’m not one to go down without a fight, so last night I set up an anti-avian defensive perimeter in my yard. 2 My hope is that after an infected bird lands and proceeds his way across the lawn to my front door in order to barge into my home and infect me, the winged nincompoop will be tempted en route to sample the toxic liquid from one of the bowls and die. This morning on the grass I found two dead cats and a comatose hobo. Obviously I need to use some stronger stuff. 1 I’m told that these aren’t the same experts who prophesized the ‘Y2K bug’ apocalypse, but I’m not sure I believe it. 2 About a dozen medium to large bowls of poison.
Post a Comment
Read more

Because they’ve had no luck finding her in Scotland

IN CHINA, HUNT ON FOR LOCH NESS MONSTER Underwater camera photograph some claim is image of 'Nessie'.
2 comments
Read more

November 06, 2005
You probably heard Somali pirates attacked a luxury cruise ship over the weekend (you probably don’t recall that in October Somali pirates captured two UN food ships ). As the Sunday Times reports: “There is growing concern that neither governments nor the shipping industry are doing enough to protect crews and cargoes and that ships are vulnerable to terrorists as well as pirates.” Unfortunately, as the above article notes, nothing much is being done to counter the pirates. Therefore I hereby urge Congress to exercise its power to "grant Letters of Marque and Reprisal , and make Rules concerning Captures on Land and Water" ( United States Constitution (Act 1 sec. 8)), in order that interested private individuals may legally seek and destroy pirate vessels that threaten ships in the Indan Ocean. The shipping industry could offer rewards to sucessful privateers. Not only would this be an efficient solution to the piracy problem, it would also be all kinds of fun. Which is pr
7 comments
Read more

November 03, 2005
Practical Ventriloquism, 1904 by Robert Ganthony. An excellent guide to the art of throwing one’s voice that is delightfully free from the political correctness that permeates more modern works on ventriloquism.
3 comments
Read more
More posts