Showing posts from December, 2005
Show all

December 30, 2005
"You know the curious thing about this is, certainly not to diminish it, I see things like that every day in the newspaper - every day. Somebody fell in their bathtub, somebody pulled out of a driveway, somebody ate a poisoned Mars bar. Who the hell knows?" - Christopher Walken. "He is a most impractical boy . . . often forgetful, he finds difficulty in the most simple things and asks absurd questions, whereas he can understand the most difficult things. He has the most distorted ideas about wit and humour; he draws over his books in a most distressing way, and writes foolish rhymes in other people's books. One is obliged to like him in spite of his vagaries." - A.H. Gilkes, the headmaster of Dulwich, about the then seventeen or eighteen year old Wodehouse. "The craft of painting has virtually disappeared. There is hardly anyone left who really possesses it. For evidence one has only to look at the painters of this century. - Balthus. "This is the
7 comments
Read more 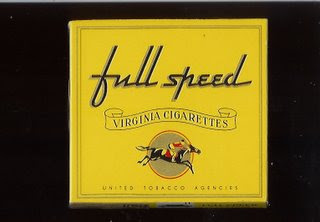 '... do you realize Jeeves, that my aunt says I mustn't smoke while I'm here?' 'Indeed, sir?' 'Nor drink.' 'Too bad, sir. However, many doctors, I understand, advocate such abstinence as the secret of health. They say it promotes a freer circulation of the blood and insures the arteries against premature hardening.' 'Oh, do they? Well, you can tell them next time you see them that they are silly asses.' 'Very good, sir.' - B. Wooster & Jeeves, Very Good, Jeeves . "Yesterday I read the Aspern Papers. No. He writes with a very sharp nib and the ink is very pale and there is very little of it in his inkpot. Incidentally he ought to have proved somehow that Aspern was a fine poet. The style is artistic but it is not the style of an artist. For instance: the man is smoking a cigar in the dark and another person sees the red tip from the window. Red tip makes one think of a red pencil or a dog licking itself, it is
Post a Comment
Read more

What the world needs now

December 19, 2005
"The music industry hasn't connected broadly with fans since the late-1990s heyday of the teen pop performed by the Backstreet Boys, 'N Sync and Britney Spears. "It's almost like we need a new genre of music," says John Sullivan, chief financial officer of Trans World Entertainment Corp., which operates music stores under the FYE and Coconuts names, among others. "There hasn't been anything fresh to get consumers excited in a while." - Silent Night for Music Sales , the Wall Street Journal . Tell Mr. Sullivan I'm working on it.
4 comments
Read more

Grappling with the unknown 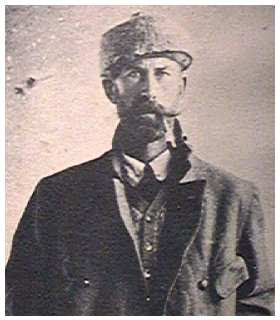 "I expect the ruins to be monolithic in character, more ancient than the oldest Egyptian discoveries. Judging by inscriptions found in many parts of Brazil, the inhabitants used an alphabetical writing allied to many ancient European and Asian scripts. There are rumors, too, of a strange source of light in the buildings, a phenomenon that filled with terror the Indians who claimed to have seen it. The central place I call "Z" -- our main objective -- is in a valley surmounted by lofty mountains. The valley is about ten miles wide, and the city is on an eminence in the middle of it, approached by a barrelled roadway of stone. The houses are low and windowless, and there is a pyramidal temple. The inhabitants of the place are fairly numerous, they keep domestic animals, and they have well-developed mines in the surrounding hills. Not far away is a second town, but the people living in it are of an inferior order to those of "Z." Farther to the south is another la
Post a Comment
Read more

December 16, 2005
Brokeback Mountain: A love affair between a pair of homosexualist cowboys ends tragically when one is killed by a horse . The actors playing the leads are (supposedly) straight. Includes graphic sex scenes. If you are into this sort of thing stay home and rent the spaghetti western Django Kill...If You Live, Shoot! instead, it's a weird and entertaining film that includes an honest depiction of homosexualist cowboys - an entire gang of them. Memoirs of a Geisha: A trio of Chinese honeys infiltrates Japan by disguising themselves as whores. The potential of the premise squandered, as unlike the homosexualist cowboy film Memoirs of a Geisha is only PG-13. The Producers: A pair of real life homosexualists (Matthew Broderick, Nathan Lane) portray heterosexual Broadway musical impresarios. Notice the pattern. Do you understand 'Hollywood logic' works now? King Kong: I’ve decided the old-style stop-motion animation is better than tedious modern CGI effects. The latte
20 comments
Read more

The Way We Linger Now

December 11, 2005
"Marina Abramovic has often been linked to Chris Burden, and with reason. She has staged extreme masochistic spectacles that shock and repel. In "Lips of Thomas," she carved a pentagram in her abdomen and whipped herself senseless...her most famous work is probably "The House With the Ocean View," performed in New York in 2002 (and featured in an episode of "Sex and the City"). For 12 days, the artist lived on three platforms in a Chelsea gallery. She had a bed, a shower and a toilet, but denied herself any nourishment except for mineral water, and any distraction; she could neither read nor write nor speak. Her life was reduced to a minimum, less than the bare essentials. "This piece will be about living in the moment," she said, "in the absolute here and now." But if the piece made demands on Abramovic, it also made demands on the spectators. Upon entering the gallery, a viewer was immediately confronted with a moral choice: did
2 comments
Read more

Cigarettes extinguished, along with liberty

December 07, 2005
At midnight tonight the State of Washington’s vindictive and senseless ban on smoking in all bars, restaurants, nightclubs and within 25 feet of any public doorway goes into effect. How did such a revolting and absurd state of affairs come about? The philosopher Roger Scruton explains : "The emphasis on life-style also explains the extraordinary war now being waged against tobacco. Smoking belongs with those old and settled habits—like calling women "ladies," getting drunk on Friday nights with your mates, staying married nevertheless, and having babies in wedlock—that reflect the values of a society shaped by the clear division of sexual roles. It is a symbol of the old order, as portrayed by Hollywood and Ealing Studios in the post-war years, and its very innocence, when set beside cocaine or heroin, gives it the aspect of discarded and parental things. Furthermore, tobacco advertising has specialized in evoking old ideas of male prowess and female seductiveness: ev
18 comments
Read more 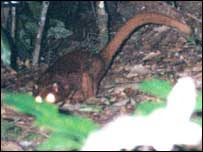 In the wilds of Borneo a team of scientists led by the biologist Stephan Wulffraat, may have discovered a new species of mammal. 1 The animal “ is bigger than a domestic cat, dark red, and has a long muscular tail .” It's believed to be carnivorous, and thought to drop down from trees on humans and then use its muscular tail to strangulate its victims while viciously gnawing on the unfortunate person’s ears and neck. Once its prey is unconscious (or dead), the nasty creature somehow drains the body of blood. (None of these details are being mentioned in the popular press, in order to avoid setting off a panic. Luckily I have my own reliable sources in Borneo). This truly is an amazing find. As the head of the “species programme” at the World Wildlife fund Callum Rankine observes "You don't find new mammals that often, and to do so must be extraordinary”. 2 I hope to journey to Borneo soon in order to capture one of these rare animals. If I do I promise to let everyon
Post a Comment
Read more

December 04, 2005
The president of Kazakhstan Nursultan Nazarbayev has been re-elected, receiving 91% of the vote. This despite (or perhaps because of?) his squandering the Kazakh people’s wealth on the building of a giant glass pyramid. Regular readers may recall my visit to Kazakhstan, my reflections on the idiotic Great Pyramid of Astana project, and my observations of the often confusing Kazakhstanian nightlife: Afghanistan, Kyrgyzstan, Pakistan, Tajikistan, Turkmenistan, Uzbekistan – all admittedly have their peculiar charms, but for me of all the countries in the world with names ending in ‘stan’ none compare to Kazakhstan. Kazakhstan! A vast and rugged country (1,049,150 sq miles) populated by descendents of Mongol and Turkic tribesman, it can be found on your map in the unfortunate position between Russia and China. [ more ]  When I announced I was going to Kazakhstan in an attempt to persuade the Kazakhs not to build a giant glass pyramid, in a city with less than 500,000 inhabitants in th
Post a Comment
Read more

December 01, 2005
One reason for the lack of material here, lately, is that I’ve been busy in inventing a new kind of music. I’m not talking about half-assedly combining two existing genres (i.e. “Country-Rap” or ‘Disco-Death Metal) to produce something less listenable to than its components and then dishonestly claiming it to be new, I mean a style of music that is genuinely original. To do this I’ve assembled an eclectic group of musicians: Gerhard Spitteler, a Swiss Alpenhornist; Donald and Stefan Tanguy, the famous identical twin Bombard players; Candi with an ‘i’, an exotic dancer who produces various percussive tones and rhythms by slapping her nude buttocks while gyrating wildly; Arthur Hines, who plays the Celeste in a free-jazz manner despite having no arms or legs; child Crumhorn prodigy Billy Nertz (age 8), DJ Gleep on the ‘Wheels of Steel’, Rod Price on slide guitar, and Melvin Barnes, PhD, a homeless man I discovered in the park subjecting innocent bystanders to loud, improvised rants ab
5 comments
Read more

They scamper off now, but for how much longer?

December 01, 2005
A violent gang of Russian squirrels attacked and killed a large dog : "Squirrels have bitten to death a stray dog which was barking at them in a Russian park, local media report. Passers-by were reportedly too late to stop the attack by the black squirrels in a village in the far east, which reportedly lasted about a minute. They are said to have scampered off at the sight of humans, some carrying pieces of flesh." That story also notes: "...in a previous incident this autumn chipmunks terrorised cats in a part of the territory."
2 comments
Read more
More posts