Showing posts from August, 2005
Show all

August 29, 2005
An article in Slate today by an authoress named Meghan O'Rourke begins: A man who doesn't want to watch his wife give birth is a jerk. This was the overwhelming consensus reached by a host of respected blogs after the publication last Tuesday in the New York Times of a piece by a therapist noting an unhappy trend: A number of his male patients have reported that after witnessing their wives have babies they no longer feel attracted to them. "I mean, how are you supposed to go from seeing that to wanting to be with …?" one husband asked, unable to finish his sentence. It made no difference that these men were patients in search of help, not Neanderthals who'd ditched their wives; the bloggers—many of whom are usually temperate—were outraged. "Would it hurt if I call you a big pussy?" one woman queried, adding, "Luckily for me, I didn't marry a total asshole, so I didn't have this problem." According to one post, a husband who finds hi
4 comments
Read more

And what do you call it? A broatee? A goateard?

Watching the 5:00 local news on the television today I saw two stories (one about a hit and run accident, the other about high gas prices) featuring interviews with men sporting a beard and a goatee at the same time (similar to the illustration at left). Did I witness something improbable? Or is this an increasingly popular style in facial hair that I've hitherto not noticed?
2 comments
Read more

August 28, 2005
Swaziland, of all places, is in the news again: The king of Swaziland's daughter was whipped by a palace official at a party of teenage virgins ahead of a festival where more than 50,000 maidens are available to become her father's 13th wife, media said on Sunday. Princess Sikhanyiso, 17, told the Times of Swaziland a palace official whipped girls, including beauty queen Miss Swaziland, at the party as a punishment after they refused to turn down the music. Can you imagine our democratically elected President having a government official give a whipping to his obnoxious daughters the next time they misbehave? Of course not, and their lack of manners indicates neither can Bush’s daughters. While disappointing, it is not surprising. Unlike Kings, who are instinctively concerned with custom and decorum, in a democracy not only is there no incentive for a leader to promote manners, doing so is actually a liability, as in order to be elected a head of state must grovel before th
Post a Comment
Read more

August 21, 2005
There’s been minimal content here lately as I’ve been focusing on doing the world’s business. Herakleitos once said “Even sleeping men are doing the world’s business and helping it along.” Indeed. Herakleitos also said “The sun is one foot wide”. He was a little off with that one. Speaking of the sun, if the sum of my heart’s ambition were a single, foil-wrapped pat of butter (and it is), the sun, whatever his width, has succeeded in melting it. So don’t expect me to make pancakes for breakfast tomorrow. By ‘make pancakes’ I mean ‘do anything useful’. Which includes making actual pancakes. Another thing Herakleitos said was “My favorite size for a pancake is one foot wide”. Now that I think about it it might have been some fat guy sitting behind me on the bus who said that. I can’t remember. But either him or Herakleitos. Despite my lethargy, I’m cheered (and surprised) by the following news: 1) The media is finally noticing the immigration problem . 2) The box office for summer
6 comments
Read more 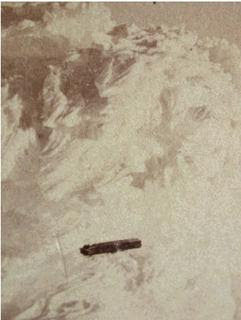 The above photo of a UFO was taken in New Hampshire in 1870. If you look closely you can see a swastika on the side of the UFO. The swastika is an ancient Hindu symbol. Could it be a photo of a Vimana Aircraft ?
6 comments
Read more

The heat is getting to me

August 15, 2005
According to WFMY News 2: Wealthy People Allegedly Conned Out Of Millions This is news? Really, what else would you expect? If you tried to con poor people out of millions you would either have to con a dollar or two from millions of poor people, or else con a dollar or two a day from one poor person for millions of days, neither of which is practical. In more interesting news, a giant baby the size of a man has been terrorizing the UK.
Post a Comment
Read more

August 10, 2005
"The owner of an ostrich ranch is planning to shut down after losing a lawsuit against hot-air balloonists he says panicked his birds into a lethal stampede ." In other news, tiny hairdresser and sometime actor Ezzy Dame has admitted to lying about being one of the original Ooompa Loompas .
2 comments
Read more

A poem by Weldon Kees

August 10, 2005
1926 The porchlight coming on again, Early November, the dead leaves Raked in piles, the wicker swing Creaking. Across the lots A phonograph is playing Ja-Da. An orange moon. I see the lives Of neighbors, mapped and marred Like all the wars ahead, and R. Insane, B. with his throat cut, Fifteen years from now, in Omaha. I did not know them then. My airedale scratches at the door. And I am back from seeing Milton Sills And Doris Kenyon. Twelve years old. The porchlight coming on again. - Weldon Kees
2 comments
Read more

Now I get up around whenever

August 07, 2005
The next time you hear someone arguing the youth of America are too slothful to compete in the global marketplace bring up Arup Manna of India, arguably the laziest boy in the world, who has been asleep for 11 months . His parents have been unable to find a way to wake him. I would advise them to try a bear . Not only are bears great at waking people up, they are also inspiring motivators .
Post a Comment
Read more 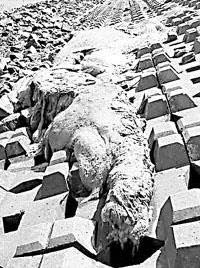 Even though Man has explored her for centuries, the briny cesspool known as the ocean still has her secrets. I’m referring, of course, to recent events in Ningbo City of Zhejiang Province, China, where the ocean, perhaps as a joke, but more likely as an insult, sloshed the enormous remains of a (possibly) hitherto unknown creature onto Ningbo City beach. The Chinese media reports : ...a fisherman for over ten years, said “I have never seen such a monster; it was larger than a whale.” It was first seen by villagers on July 20, according to Mei who breeds fish nearby, and is nearly 12 meters long and weighs around 2 tons, according to district sea and fishery bureau staff. The animal reportedly has a long thin head and a snout nearly one meter long. ...it has been impossible to identify, but has been described as having some hair, and orange stripes across a three to four-meter wide belly. The skull, which alone weighs over 100 kg, and coccyx of the creature have fallen from its
3 comments
Read more
More posts