Showing posts from November, 2009
Show all

Peculiar apparitions to the soul

November 29, 2009
In a case eerily similar to the murder of Aisia A. Johnson , three gunmen broke into an apartment near Indian School Road and 67th Avenue and began shooting , killing one of the occupants and wounding another. Two of the shooters then fled in a white van. A white van was seen lurking near an athletic equipment shed in Lynchburg, then it was gone. 15 minutes later the athletic equipment shed burst into flames . In Kissimmee motorists observed a white van intentionally hit a motorcycle , causing it to crash. The motorcyclist died at the scene. The homicidal white van remains at large. A white van driven by a man named Jesus led police on a wild chase through Bloomfield Township , “smashing into several cars and construction barrels”. After crashing into an SUV on Big Beaver road, Jesus leapt from the wreckage and began throwing punches at police, who responded with Tasers. Following the zapping, Jesus became unresponsive, was taken to a hospital, and pronounced dead. In Port St.
6 comments
Read more

November 29, 2009
Old issues of The Crisis (“a journal of civil rights, history, politics, and culture that “seeks to educate and challenge its readers about issues that continue to plague African Americans and other communities of color”) are now online, so I no longer have to go the library to read them. In an issue from 1995 I found an amusing interview with Barack Obama . In it he explains “ it’s liberating to be in a country where black people are in the overwhelming majority ”; says “integration is not a victory on our part”; and complains about his grandmother’s rational fear of  “strange black men”. Two of the greatest publications in American history, the Weekly World News  and LIFE Magazine, are also available. Both teem with incredible stories .
3 comments
Read more

November 15, 2009
" In 1924 Claude Friese-Greene (cinematographer and son of moving-image pioneer William) embarked on an intrepid road trip from Land's End to John O'Groats. He recorded his journey on film, using an experimental colour process. Entitled The Open Road , this remarkable travelogue was conceived as a series of 26 short episodes, to be shown weekly at the cinema."
5 comments
Read more 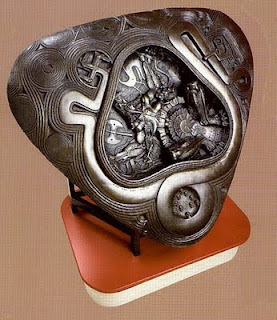 Scientists have discovered a way to increase muscle mass and strength in monkeys . “Remember when you made fun of us in high school?” said one researcher, “Well who’s laughing now?” Dr. J. Allan Hobson, A sleep researcher at at Harvard, thinks “ Dreaming is a parallel state of consciousness that is continually running but normally suppressed during waking .” What if, at certain times, the suppression is disrupted? The parallel dream state leaking into waking consciousness might be behind many accounts of Yetis, UFO’s, aliens , bull-beggars, spirits, elves, hags, fairies, satyrs, pans, faunes , sylens, tritons, centaurs, dwarfs, nymphes, Incubus, Robin good fellow, the spoom , the man in the oke, the fire-drake, the puckle, Tom Thombe, Tom tumbler boneless, and other nonsense. One thing it does not explain is the Sandsend Blob , because it was seen by a person and a dog . STANISLAV SZUKALSKI. Deluge . “Among [ Szukalski’s ] most strongly held (and extensively documented) theori
6 comments
Read more

November 10, 2009
And so you take criminal caitiffs, murderers, and the like, and hang them on gibbets 'for an example to deter others.' Whereupon arise friends of humanity, and object. With very great reason, as I consider, if your hypothesis be correct. What right have you to hang any poor creature 'for an example'? He can turn round upon you and say, "Why make 'an example' of me, a merely ill-situated, pitiable man? Have you no more respect for misfortune? Misfortune, I have been told, is sacred. And yet you hang me, now I am fallen into your hands; choke the life out of me, for an example! Again I ask, Why make an example of me, for your own convenience alone?"—All 'revenge' being out of the question, it seems to me the caitiff is unanswerable; and he and the philanthropic platforms have the logic all on their side. The one answer to him is: "Caitiff, we hate thee; and discern for some six thousand years now, that we are called upon by the whole Unive
2 comments
Read more 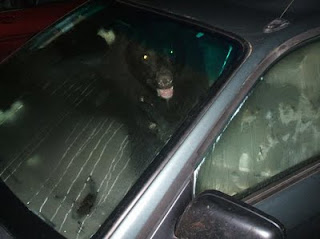 In our artificial age most of us view bears as heroes and entertainers . We forget bears are capable of crimes more heinous than stealing picnic baskets. Take the bear in Florissant, Colorado, captured breaking into a car . His motive was probably theft; the possibility he wanted to steal the car and use it run over an ursine ice skating instructor can not be ruled out. More disturbing is the case of Juan the Andean spectacled bear , resident of a nice zoo in Germany. After crossing a moat using a log for a raft, Juan climbed a wall and "went straight for [a] playground" full of children. Cut off by zookeepers, he attempted to flee on a stolen bicycle. What Juan  planned next  I hate to even think about .
Post a Comment
Read more

Death comes for the Qaiser

November 08, 2009
We’ve grown so accustomed to bears being fat, furry entertainers who amuse us by ice skating, juggling, wrestling, and "inexplicably" murdering people , that it’s easy to forget bears can also be heroes. Heroes waging one-bear wars against terrorists : A wild bear mauled to death two militants of the Hizbul Mujahideen outfit in a south Kashmir forest on Monday, officials said. A spokesman of the army said a wild bear entered the forest hideout of the separatist guerrillas and killed two of them in Kulgam district. "The bear entered the hideout of the terrorists in Dand Nar forest area in Kulgam district today and killed two Hizbul Mujahideen terrorists identified as Saifullah and Qaiser," the spokesman said. The spokesman said Saifullah was the district commander of the Hizbul Mujahideen for Pir Panchal area while Qaiser was a tehsil (sub-district) commander of the outfit.   Surprisingly , the tangly jungle of the Kashmiri mountains is safer than most large
6 comments
Read more

After watching the Natural Geographic Channel 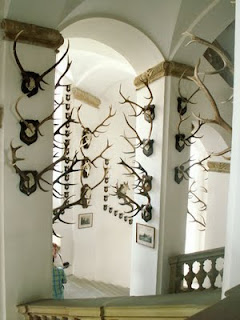 Remember Nature? She’s still out there, big and dumb, teeming with mole rats, mamba snakes, and documentary film crews. Nature thwarts most avenues of legal redress, as anyone who has attempted to subpoena a honey badger will attest. You can hardly get from A to B in Nature without being mauled by packs of gnus. Climb a tree to evade the fire ants and you incur the wrath of the sloth. Keep the curtains closed and have dinner delivered.
Post a Comment
Read more
More posts