August 01, 2005
Even though Man has explored her for centuries, the briny cesspool known as the ocean still has her secrets. I’m referring, of course, to recent events in Ningbo City of Zhejiang Province, China, where the ocean, perhaps as a joke, but more likely as an insult, sloshed the enormous remains of a (possibly) hitherto unknown creature onto Ningbo City beach. The Chinese media reports:

...a fisherman for over ten years, said “I have never seen such a monster; it was larger than a whale.”

It was first seen by villagers on July 20, according to Mei who breeds fish nearby, and is nearly 12 meters long and weighs around 2 tons, according to district sea and fishery bureau staff. 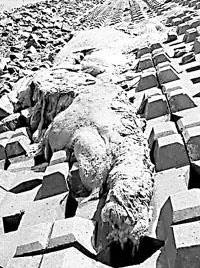 The animal reportedly has a long thin head and a snout nearly one meter long.

...it has been impossible to identify, but has been described as having some hair, and orange stripes across a three to four-meter wide belly. The skull, which alone weighs over 100 kg, and coccyx of the creature have fallen from its body.

Undoubtedly the ocean, in parts yet uncharted, teems with such disgusting blobs – and worse. Given that most of the sea creatures science has managed to catalogue are also repulsive, I believe my stance of never immersing myself in the ocean has never been more justified.

Almost as disturbing as the sea monster depicted in the photo is the appearance of the beach itself, as it seems to resemble a gigantic waffle iron. Why is this? Did the Chinese bosses do it to make skipping work to go to the shore undesirable? Or do the Chinese use their beaches to cook giant waffles?
China