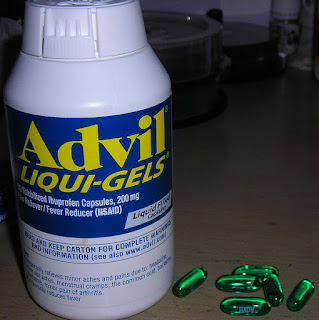 I woke up one morning with a minor headache. With each hour the headache grew. I was walking to my job when I saw this girl on her way to class. I looked awful, and she gave me some Advil and kept going. By mid-afternoon I could barely stand. I called my supervisor. When he arrived I lay down in the stockroom, because I had no idea what else to do. I was afraid. I did not understand what was happening. I did not know whom to call. I was lying there simmering, half-awake, hoping to recover. My supervisor knocked on the door. Someone had come to see me. It was her. The girl with the long dreads helped me out and onto the street. She flagged down a cab. Halfway through the ride, I opened the door, with the cab in motion, and vomited in the street. But I remember her holding me there to make sure I didn't fall out and then holding me close when I was done. She took me to that house of humans, which was filled with all manner of love, put me in the bed, put Exodus on the CD player, and turned the volume down to a whisper. She left a bucket by the bed. She left a jug of water. She had to go to class. I slept. When she returned I was back in form. We ate. The girl with the long dreads who slept with whomever she chose, that being her own declaration of control over her body, was there.

- America’s Tolstoy mesmerizingly recounts the struggle between his black body and the influenza virus.


I am standing outside the library debating the Republican takeover of Congress or the place of Wu-Tang Clan in the canon. A dude in a Tribe Vibe T-shirt walks up, gives a pound, and we talk about the black bacchanals of the season…

- A portrait of our preeminent public intellectual as a young man.


The fear lived on in their practiced bop, their slouching denim, their big T- shirts, the calculated angle of their baseball caps, a catalog of behaviors and garments enlisted to inspire the belief that these boys were in firm possession of everything they desired.

- Essential brilliance from essentially the most essential writer in history.
quotes