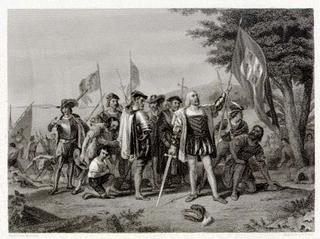 "Steered west-southwest; and encountered a heavier sea than they had met with before in the whole voyage. Saw pardelas and a green rush near the vessel. The crew of the Pinta saw a cane and a log; they also picked up a stick which appeared to have been carved with an iron tool, a piece of cane, a plant which grows on land, and a board. The crew of the Nina saw other signs of land, and a stalk loaded with rose berries. These signs encouraged them, and they all grew cheerful. Sailed this day till sunset, twenty-seven leagues." - the journal of Columbus in his voyage of 1492.

It’s become unfashionable to celebrate Columbus Day. The campaigners against Columbus Day hate Columbus because they hate Western Civilization in general, but they also despise him for a more specific reason: Columbus risked life and fortune to sail across uncharted waters and discover The New World. The achievement of greatness through daring and adventurousness is intolerable to the various mediocrities (race activists, phony academics, diversity consultants, etc.) that malign Columbus, as it reminds them they are parasitic worms.
diversity