November 12, 2005
The Angraecum sesquipedale Thouars orchid, native to Madagascar, is notable for having a "nectar tube of 10-12 inches in length with only the distal end filled with nectar". After studying this orchid, Charles Darwin realized there must also exist an insect equipped to fertilize it, and in 1862 Darwin wrote:

"It is, however, surprising that any insect should be able to reach the nectar : our English sphinxes have probosces as long as their bodies ; 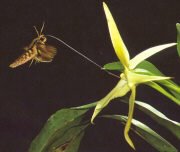 but in Madagascar there must be moths with probosces capable of extension to a length of between ten and eleven inches !" (On the Various Contrivances by which British and Foreign Orchids are Fertilised by Insects)

The moth predicted by Darwin was finally discovered 41 years later. Named Xanthopan morgani praedicta, it has a proboscis which unfurls to a length of around 10 inches.

In a similar manner, after I read about a newly discovered giant ape Gigantopithecus blackii, who was 10 feet tall and weighed up to 1,200 pounds (and co-existed alongside humans!), I realized in a flash of insight that during the era of this ape-giant there must have also existed (and perhaps still does?) a kind of humongous banana, perhaps measuring as much as yard in length, for the monster to snack upon when he got hungry. I’m optimistic that sometime during the next 41 or so years someone will uncover a fossil of one of these enormous yellow fruits, as it would make perfect sense. 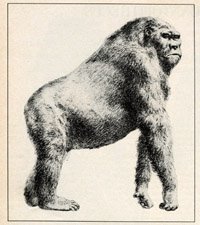