September 30, 2007
“When humanity, subjugated by the terror of crime, has been driven insane by fear and horror, and when chaos has become supreme law, then the time will have come for the empire of crime.” - The Testament of Dr. Mabuse.

A MYSTERIOUS oil spill has covered the roads around Whitby and has brought chaos to the town.

Police were forced to hold up traffic at locations around the town while sand was put down.

One witness described seeing pedestrians fall in the street and cars skidding as they struggled for grip in the wet conditions.

Sgt Paul Delaney described the source of the spill as a "mystery".

Notice the mysterious oil spill is both more elaborate (it’s no simple task to not only spread that much oil, but do it undetected) yet less physically destructive than ordinary vandalism. Why would someone do this? Because it brought chaos to the town. This is what links the bizarre and seemingly disconnected events of Whitby - the senseless crimes, the sightings of weird creatures and out of place animals, the outbreaks of diseases “seen nowhere else in the country”, all serve to bring chaos to Whitby.

But what comes after?

“Log of the Demeter, Varna to Whitby. Written 18 July: things so strange happening, that I shall keep accurate note henceforth till we land.”

“On 17 July, yesterday, one of the men, Olgaren, came to my cabin, and in an awestruck way confided to me that he thought there was a strange man aboard the ship. He said that in his watch he had been sheltering behind the deckhouse, as there was a rain storm, when he saw a tall, thin man, who was not like any of the crew, come up the companionway, and go along the deck forward and disappear. He followed cautiously, but when he got to bows found no one, and the hatchways were all closed. He was in a panic of superstitious fear, and I am afraid the panic may spread. To allay it, I shall today search the entire ship carefully from stem to stern.” – Dracula, by Bram Stoker1

A ship in trouble off the coast of Whitby. A distress signal, a rescue, a seemingly happy ending:

A WHITBY lifeboat was called to assist a chartered fishing vessel which got into trouble off the coast on Saturday.

The 37ft Tina Dawn reported to Humber Coastguard at around 11.30am that it had broken down and couldn’t drop anchor due to the depth of the water.

The George and Mary Webb lifeboat was launched and towed the boat, with its two crew and 17 passengers, back into the harbour.

But nothing is ever as it seems in Whitby:

THE skipper of the Tina Dawn chartered fishing vessel which was towed to safety on Saturday morning has contacted the Gazette to stress how many people were on board.

Gordon Cross says there were 12 anglers and two crew on board the vessel when it broke down and could not drop anchor due to the depth of the water...

The Gazette was told by Humber Coastguard there were 17 passengers and two crew on board and the coastguard confirmed those numbers when we asked again.

However, Mr Cross is adamant there were only 12 passengers and two crew on the vessel when it got into difficulty.

A discrepancy of one or two could be attributed to bureaucratic error, but it stretches the imagination to believe the coastguard miscounted by five the number of people on a small boat. Leaving, as is usually the case with Whitby, unanswered questions and feelings of unease. Who were these five passengers? Where did they go? What comes after?

“The Whitby Gazette', of which I had made cuttings, had helped us to understand the terrible events...” – Dracula, by Bram Stoker

Approximately eight miles from the accursed town of Whitby is the village of Goathland:

GOATHLAND people awoke on Tuesday morning to find six decapitated heads scattered around the village.
The carved stone faces were placed at different spots, including in the phone box and as quickly as they appeared they had gone again.

The Whitby Gazette received an anonymous call saying that the mysterious heads had appeared overnight.

Reporter Carl Gavaghan and photographer Doug Jackson instantly set off for the village but arrived to find no sign of the boulders.

However, villagers we spoke to closed ranks and denied all knowledge of the strange occurrence.

Doors closed, curtains were pulled and residents remained tight-lipped on where the stones came from and where they had gone. Eventually one of the heads was found hidden away behind a wooden board and a quick picture was snapped. 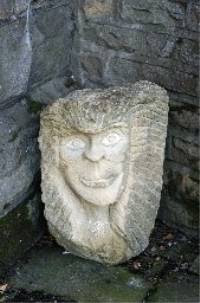 What comes after the stone heads of Goathland?
1 I’ve never read Dracula (apparently no one else has, either), so I only recently discovered much of the novel takes place in Whitby.