July 19, 2009
On July 2 the bodies of popular masked midget wrestlers La Parkita and El Espectrito Jr. were found in a Mexico City hotel room. Authorities believe the tiny grapplers were drugged and murdered by thieving whores.

Author, investigator, and Fortean theorist John Keel died of cancer on July 3. Keel coined the highly useful terms “ultraterrestrials” and “MIB (Men in Black)”. His most famous book was The Mothman Prophecies. Keel was 79. 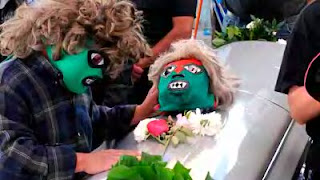 Walter Cronkite died on July 17, at the age of 92. Beginning in 1962 “Uncle Walter”, as pudding heads called him, read the news on television for the CBS network. Eventually Cronkite became “the most trusted man in America”, demonstrating the hypnotic power of the idiot box, and the ease with which Americans are gulled. Cronkite left CBS in 1981 amid allegations he had drunkenly raped CBS colleague Bob “The Captain Kangaroo” Keeshan during an out of control office party. Late in life Cronkite dated the older sister of singer Carly Simon.
obituaries