July 19, 2007
The results of the first ADC customer satisfaction survey which asked How can ADC be improved? are in.

18% want to see more travel posts. We all have dreams, I suppose.

No one wants more political posts, meaning 100% of readers agree with me democracy has failed, and discussing politics only serves to distract from time better spent stockpiling guns and ammunition.

Counting my own vote, one person wants to see more Whitby posts. Meaning no one, except me, cares the little town of Whitby was nearly smote by a tornado (that’s right, a tornado) and no one, other than myself, wants me to explain how the source of this freakish weather event is undoubtedly Whitbian diabolists trifling with storm demons the Chaldeans called shedu. Bastards.

General gravitation must be recognised for itself as a profound thought, which constitutes an absolute basis for mechanics if it is conceived initially in the sphere of reflection, though it is so bound up with it through the quantitative determinations that it has attracted attention and credit, and its verification has been based solely on the experience analysed from the solar system down to the phenomenon of the capillary tubes. Certainly gravitation directly contradicts the law of inertia, for, by virtue of the former, matter strives to get out of itself to another. In the concept of gravity, as has been shown, there are included the two moments of being for itself and of that continuity that suspends being for itself These moments of the concept now experience the fate, as particular forces corresponding to the power of attraction and repulsion, of being conceived more precisely as the centripetal and the centrifugal forces, which are supposed, like gravity, to act on bodies, and independently of each other and contingently, to meet together in a third entity, the body. In this way whatever profundity was contained in the thought of general gravitation is destroyed again, and the concept and reason will be unable to penetrate into the theory of absolute motion, as long as the vaunted discoveries of forces prevail there.

What springs to normal minds after reading that passage is why? Why did Hegel write such things? Probably because he couldn’t help it, though it’s possible he had an extremely odd sense of humor. Let us speak no more of Hegel.

27% of ADC readers want more nudity, meaning nearly a third of you are unable to locate nudity on the internet without help. Good lord that’s sad. But I’m nothing if not helpful, so enjoy: 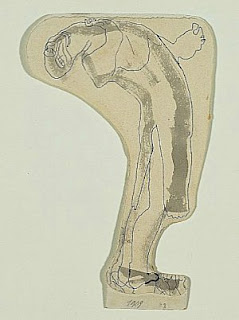