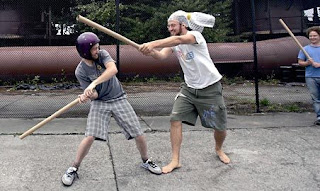 At a Seattle area park last Sunday a group of involuntary celibates convened to stage a cardboard tube fighting tournament:

"Two dozen fighters obeyed the tenets of cardboard-tube fighting Sunday, battling for the glory of becoming the champion.

They took to a concrete surface at Seattle's Gas Works Park, wielding their weapons: 3-foot-long cardboard tubes that look like the kind used for gift wrap.

Most fighters employed a two-handed grip; the more assured used one hand. Those who break their tubes do not advance to another round.”

Every day I find it harder and harder not to hate my own country.

"I knew I had to go," he said of the tournament.

"It sounded like something that was amazing and it was. This was the only thing we found to do that was entertaining all week."