Wonderful Indeed Are The Preserves of Time 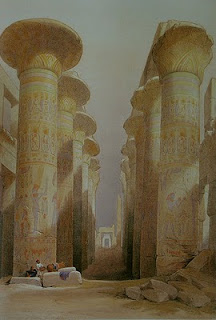 That mummy is medicinal, the Arabian Doctor Haly delivereth and divers confirm; but of the particular uses thereof, there is much discrepancy of opinion. While Hofmannus prescribes the same to epileptics, Johan de Muralto commends the use thereof to gouty persons; Bacon likewise extols it as a stiptic: and Junkenius considers it of efficacy to resolve coagulated blood. Meanwhile, we hardly applaud Francis the First, of France, who always carried Mummia with him as a panacea against all disorders; and were the efficacy thereof more clearly made out, scarce conceive the use thereof allowable in physic, exceeding the barbarities of Cambyses, and turning old heroes unto unworthy potions. Shall Egypt lend out her ancients unto chirurgeons and apothecaries, and Cheops and Psammiticus be weighed unto us for drugs? Shall we eat of Chamnes and Amosis in electuaries and pills, and be cured by cannibal mixtures? Surely such diet is dismal vampirism; and exceeds in horror the black banquet of Domitian, not to be paralleled except in those Arabian feasts, wherein Ghoules feed horribly.

But the common opinion of the virtues of mummy bred great consumption thereof, and princes and great men contended for this strange panacea, wherein Jews dealt largely, manufacturing mummies from dead carcasses, and giving them the names of kings, while specifics were compounded from crosses and gibbet leavings. There wanted not a set of Artificers who counterfeited mummies so accurately, that it needed great skill to distinguish the false from the true. Queasy stomachs would hardly fancy the doubtful position, wherein one might so easily swallow a cloud for his Juno, and defraud fowls of the air while in conceit enjoying the conserves of Canopus.

Radzivil hath a strange story of some mummies which he had stowed in seven chests, and was carrying on ship board from Egypt, when a priest on the mission, while at his prayers, was tormented by two ethnic spectres or devils, a man and a woman, both black and horrible; and at the same time a great Storm arose at Sea, which threatened shipwreck, till at last they were enforced to pacify the enraged sea, and put those demons to flight by throwing their mummy freight overboard, and so with difficulty escaped. What credit the relation of the worthy person deserves, we leave unto others. Surely if true, these demons were Satan's emissaries, appearing in forms answerable unto Horus and Mompta, the old deities of Egypt, to delude unhappy men. For those dark caves and mummy repositories are Satan's abodes, wherein he speculates and rejoices on human vain-glory, and keeps those kings and conquerors, whom alive he bewitched, whole for that great day, when he will claim his own, and marshall the kings of Nilus and Thebes in sad procession unto the pit.

Death, that fatal necessity which so many would overlook, or blinkingly survey, the old Egyptians held continually before their eyes. Their embalmed ancestors they carried about at their banquets, holding them still a part of their families, and not thrusting them from their places at feasts. They wanted not likewise a sad preacher at their tables to admonish them daily of death, surely an unnecessary discourse while they banqueted in sepulchres. Whether this were not making too much of death, as tending to assuefaction, some reason there were to doubt, but certain it is that such practices would hardly be embraced by our modern gourmands who like not to look on faces of morta, or be elbowed by mummies.

- from "Fragment on Mummies", a forgery of Sir Thomas Browne written by James Crossley.
quotes