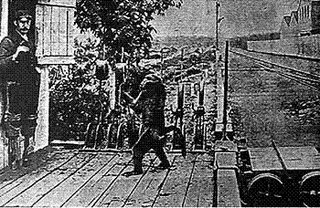 Our friend the club-wielding chimp has not been captured, or even seen again. Some people now think the chimp may have been carrying an ordinary stick, not a club. (Some people think it wasn’t a chimp at all, but a Bigfoot. It’s best to avoid these people.) As this mystery may never be solved, let us turn our gaze from the antics of chimpanzees, and instead ponder the antics of a baboon.

His name was Jack, and in the late 1800’s he was employed as a signalman for the Cape Government Railways:


A locomotive driver were given secret instructions and all present waited to see if Jack will past this strenuous test. Each time that the driver blasted a different signal Jack would change the correct signal and points without fail. Jack even looked around in the direction of the oncoming train to make sure that the correct lever and signal were changed. Jack has passed his test with flying colours and were duly employed by the authorities and from that day became known as Jack the Signalman. Bot not only did he get his monthly rations from the government but he also received an employment number.

Besides signaling, Jack would sweep up, act as watchman, and pushed the “trolley” his handicapped friend and co-worker James ‘Jumper’ Wide (the man on the left in the above picture) used to get to work (notice Wide is wearing a pair of peg legs he made himself). Prior to working on the railroad, Jack was employed as an oxen-driver.

Today, of course, it would be considered animal cruelty to put a baboon to work, and even if you could most of the jobs traditionally done by baboons have been taken by illegal aliens.

(I became aware of Jack the Signalman by reading this month’s issue of Fortean Times.)
primates