July 19, 2007
Innovative Chinese fish farmers are growing gigantic fish able to induce food poisoning in seven times as many American consumers at half the cost. 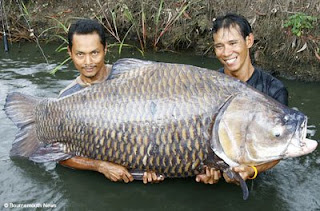 Another sector where the Chinese are making gains is begging:

Police said on Monday that two beggars operating near MRT stations in Taipei City and Taipei County turned out to be professional beggars from China who had entered Taiwan on business visas...Liang Yiping (梁一平), 32, faked deafness and muteness when confronted by police at Yongan Market station, but his identity was later confirmed after officers found he had Chinese currency and more than NT$10,000...After running a background check, they established that he had entered the country with Guo Anquan (郭安銓), 53, on July 12. Guo was later picked up at Ximending station...Liang and Guo had been staying at a hotel near Ximending. Police said the men claimed they were collecting money to return home...They claimed that the NT$30,000 that police discovered in their bags and clothes had been collected over three days of begging.

That projects to about NT$800,000 a year, more than the median salary of Taiwanese computer programmers. Mendicants in America rarely approach returns like that, because unlike the rest of the economy they haven't adapted or improved customer service. I observe beggars on a daily basis losing transactions by being asleep, and driving clients away by glaring, smelling, even bellowing. Unlike their Chinese counterparts, few bother to feign handicaps, often because they don’t know how. Analysts agree the failure to reinvest profits in employee training has been a shortsighted strategy that has impaired the long term profit goals of the American beggary industry.
China