March 15, 2006
The Japanese have invented a robot for the home, named RI-MAN, capable of carrying a life-like, realistic sex doll in his robot arms. 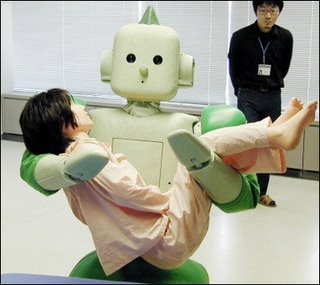 This is a tremendous breakthrough for feeble and lazy perverts of the life-like, realistic sex doll persuasion, who no longer have to get out of bed.

In the future RI-MAN the robot may also be used to care for Japan’s elderly, so RI-MAN has been programmed to distinguish eight different kinds of smells. I’m guessing one is doo-doo smell, one is that weird old people smell, and one is banana pudding smell. That leaves five smells I’d rather not try and guess.

In the future, experts tell us, America will use Mexican immigrants to take care of her excess elderly, and that with a little training many of them can be taught to distinguish as many smells (ocho) as RI-MAN. I wonder if this preference for Mexicans isn’t motivated by robo-phobic bigotry. It’s claimed Mexican immigrants are cheaper than robots. Perhaps, but look at RI-MAN’s hands - he couldn’t hold a knife even if he wanted to. How much is that peace of mind worth?
Japan oldies