March 02, 2006
High school geography teacher Jay Bennish finds himself embroiled in controversy after delivering a lecture to his class on the malevolence of America which included comparing President Bush to Adolf Hitler, instead of explaining how to find Cucamonga on a map, like he should have been doing. We all know this sort of nonsense 'goes down' (to use the kids’ vernacular) in the schools all the time, but unfortunately for Jay (I think it’s safe to assume no one call him Mr. Bennish, at his own insistence) a student taped his ravings, the tape was heard by the student’s father, the father gave the tape to the media, and now Jay is famous.

The tape itself is amusin. If you’ve heard it notice what little response there is, positive or negative, by the students to anything Jay says. It brings back fond memories of so many of my own school days, spent listening to some leftwing burnout with a bad haircut rant about the evils of the United States and the Nazism of Ronald Reagan to an utterly indifferent classroom. Some things don't change.

Another teacher making the news is 71 year old Miss Lily McBeth, of Eagleswood, New Jersey, who was a man until undergoing “gender reassignment surgery” last year.

It seems some parents are less than enthusiastic about having Miss McBeth molding the impressionable minds of their young children. 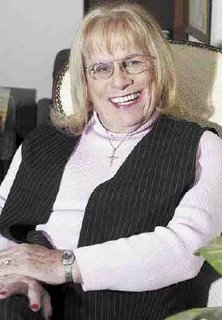 It puts the lotion on its skin or else it gets the hose again.

The Associated Press reports:  "not everyone in this rural Ocean County township wants her teaching children. 'It's just bigotry,' said Leslie Farber, McBeth's lawyer, referring to community opposition."
I’m confused as to how objecting to letting a dick-chopped fruitcake in a dress teach elementary school is bigotry. It seems common sense. It certainly puts the complaints about Jay Bennish in perspective. Perhaps I’m being insensitive, but if I am, so what? As Miss McBeth herself/himself/itself observes:“It's never too late to be yourself.”

And if being myself means being insensitive to and mocking of those like McBeth, well, by his/her/its own logic that’s his/her/its problem, isn’t it?