“This new art is geometrical in character, while the art we are accustomed to is vital and organic. It so happens there have been many other geometric arts in the past.”

“You have these two different kinds of art. You have first the art which is natural to you, Greek art and modern art since the Renaissance. In these arts the lines are soft and vital. You have other arts like Egyptian, Indian, and Byzantine, where everything tends to be angular, where curves tend to be hard and geometrical, where the representation of the human body, for example, is often entirely non-vital, and distorted to fit into stiff lines and cubical shapes of various kinds.”

“When we turn to Egyptian art, we find in the endeavour to escape from anything that might suggest the relative and impermanent there is always the same tendency to make all the surfaces as flat as possible.”

“...a new geometrical art is emerging which may be considered as different in kind from the art that proceeded it, and more akin to the geometrical arts of the past...”

"You and I," said Henri Rousseau, sincerely addressing his host Pablo Picasso, "are the two most important artists of the age - you in the Egyptian style, and I in the modern one." 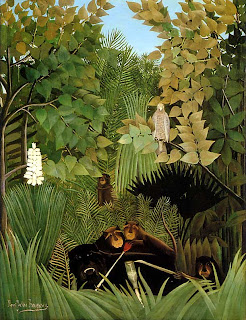