April 10, 2006
Clouds. We’ve all seen them up in the sky, floating soundlessly, puffy and innocuous. But it turns out not all clouds are innocuous. Scientists have discovered a species of cloud that destroys the ozone layer, and according to the experts this type of cloud has been doing so for years, unnoticed until now. As if this weren’t disturbing enough, these clouds are filled with nitric acid. For what legitimate purpose would a cloud need nitric acid?

Elsewhere - other types of unusual cloud:


One pleasant summer morning in 1975, an Oyster Bay, New York, science teacher named Tom D'Ercole was in his driveway about to enter his car when he took a last glance up at the sky. There, hovering above the roof of his house, he saw a small dark cloud unlike the occasional cumulocirrus clouds that were floating by at a much higher altitude.


"The 'cloud' seemed to move and slightly enlarge as I watched it," D'Ercole related. "This basketball-sized 'cloud' floated back and forth across the peak of the roof, changing in shape from a small globular mass to a larger ovoid and finally becoming an abstract, multicurved, dark, vaporous 'something.' It finally measured about six feet in height and 11/2 feet in width."

Stunned and unable to think of a rational explanation, he continued to watch in disbelief as events took an even stranger turn. The cloud seemed to inhale, purse its "lips," and direct a stream of water toward him and the car, soaking both. After a minute the spray stopped, and the cloud vanished instantly.

After changing his clothes, D'Ercole took his wet shirt to Garden City Junior High School, where he worked, and ran a pH test on it. The precipitation was simply water. 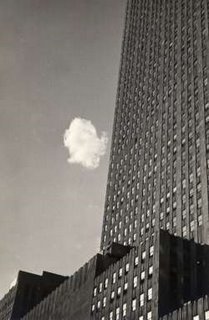