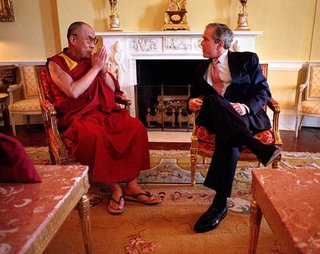 Why is this awesome? I’m mystified. Another mystery is why I'm supposed to care what some random guy (he is, read how he got his job)1 in a bathrobe and flip-flops thinks. If you are incapable of wearing appropriate shoes I really doubt you've managed to hit upon a solution for world peace that would actually work.

1According to the Lama's autobiography he got the job in part because he was a greedy child:

"toys attractive to a small boy were presented to the three year old Lhamo Thondup (the child Dalai Lama's original given name). The child...correctly identified only those items that were his in his former life, saying 'It's mine, It's mine.'"