April 19, 2006
Is the Cave Boy crisis over? According to a story published in the Springfield News-Leader, which describes the rescue of a boy from the cave (Rockhouse Cave) near Cassville, it is:

“Rescue crews spent more than five hours Tuesday extricating an injured Springfield Public Schools student from a cave near Cassville.
The 13-year-old fell or slipped and hurt his back while climbing a slope in the cave during a school field trip.”

But note the age of the boy: thirteen. As careful readers surely recall, the age of the Springfield Cave Boy was fourteen, meaning the rescued boy is an entirely different cave victim, or possibly a hoaxer - a Cave Boy copy-cat if you will. Meanwhile the real Cave Boy lies a moldering, trapped somewhere within the bowels of Rockhouse Cave, forgotten by all. Except me. Although the cave itself looks pretty happening: 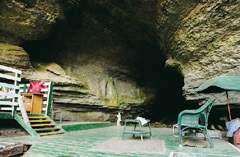 Why our ancestors ever left stylish caves for shoddy, miserable huts I’ll never know. Swami was on to something.

As for Cave Boy, the original Cave Boy, things look bleak. I fear his only hope is if I’m able to generate publicity of his predicament by cashing a gigantic tri or superfecta ticket in Cave Boy's honor at the 132nd Running of the Kentucky Derby. Wish me luck.